that I am going to post this picture. This is the yard circa 2001. 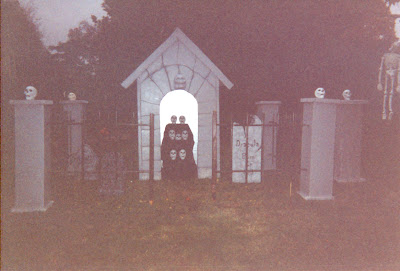 There you have it the very first crypt/mausoleum that we ever made. Notice the accurate hand drawn grout lines (LOL!)...I don't remember, but it looks like I did that with a soldiering iron :)

In case you miss this detail,..notice the very bad plastic skull above the entrance. I believe that was a skull I took off a fog machine - you know where the fog comes out his mouth :) I am happy to say that both the skull and the crappy fog machine are both long gone. :D

I particularly like the solid gray columns with the different and ridiculously out of proportion skulls on them....and what is with that other column by the blucky? Was I bored and wanted to make another one? No dear haunters and haunt fans.....likely has to do with the frog queens inability to do math, I would guess I made one too many - there is a good reason I am in marketing and not accounting.

Oh, and more store bought tombstones (yippee!!) there to the right...The left one looks handmade though, and it is one of the good versions..... hum......I have been making tombstones longer than I thought!

And what was I thinking by not removing the silver backing on the foam (inside the crypt)!!! Seriously, frog queen must have been drinking the paint thinner!! Was I thinking it would reflect the lighting that I did not have up??!? Maybe reflect the streetlight?!?! I can tell you now I have no idea why I missed that detail...((hangs head in shame))

And how about my last minute idea of something to put in the crypt. I believe that is a short ladder with black fabric draped over it and if I remember right, those are the original plaster of Paris skulls that my brother made that we later used for candle holders.....until the famous and educational fire. :)

This is the oldest picture I can find......so I believe this is as bad as the torture will get....that is unless I find the witches. Oh yes, the witches.....they were dreadful.....so very, very dreadful.
As decreed by Chris 'Frog Queen' Davis at 11:20 AM