So after husband cast me some skull faces and epoxied them on, he then too Fix-It and filled in the area around the skull face. He did it in a square to match the square pattern already there so that it looks more natural. 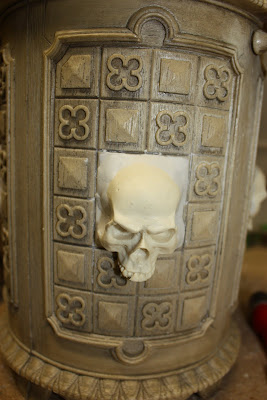 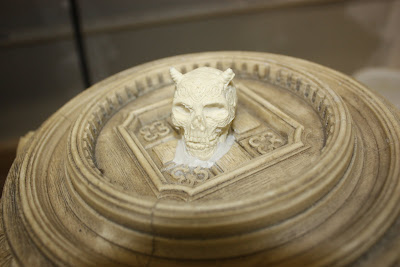 Then husband cast me a small skull to replace the brass piece on the lid for opening the bucket. Much better now. Also took a bit of Fix-It to smooth out around the base of the skull.
This was done on all four panels of the ice bucket. Why is the frog queen making a Holloweenified ice bucket? Well, we have a lot of parties and events at the graveyard and I am always just putting the ice in a bowl...mostly because I could not find an ice bucket I liked. After years of searching it became apparent that I was never going to find one and I needed to make one myself....hence this folly! 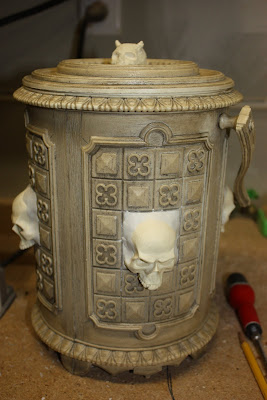 Now I just need to take the dremel and sand out the Fix-It and skulls to remove the seams and edges - then we are off to a couple coats of paint and we are done!
As decreed by Chris 'Frog Queen' Davis at 11:37 PM