So as a Halloween blog I have to say that sometimes I have felt my inspiration corralled.

On that note, in order to get back to blogging, I will say that not all of my work will be about Halloween.  Gonna talk about what moves me.  May start a whole new blog.....not sure about the future today.

That is because recently I have taken a journey into my past.  Halloween was still part of it then, but this is not that story.

Husband and I were married in the early 80's.  Husband, who started out as a theater arts major, quickly changed his course of study to computer science, because he was good at it....and it would make more money and more 'normal' hours.

After floating around for a few years, we ended up back in my old stomping grounds of Southern California.  He worked at a computer sales store that did some custom programming on the side.  We would spend our nights and weekends with friends playing the Infocom games our Kaypro portable computer.  I can remember spending my off hours around the store playing an Indian Jones type game on what I think was an early Apple computer.

Things progressed in the tech field very fast it was then that husband got a job at JPL as a programmer.  Awesome opportunity in Pasadena with like most people in the area, a terrible commute.

This was the early days of computers when a desktop cost a silly amount of money, so building your own from parts became the way the 'nerds' did it.  So I can remember the early 8086 chips and so forth....putting a computer together from parts and testing and retesting to get the thing to work.  There are a LOT of cabling and seating controller boards into motherboards in our past.

Working at JPL - Jeff got to work with one of the creators of dBase, THE database software at the time.  I looked on Wikipedia to see if I could remember the name, but he would have to give you those details.

It was an interesting, no, that is not the word, exciting time to be in the business - it did not seem so back then, but looking back, everything was changing fast.  There was always something new from some little company almost every day.  Both the software and the technology were growing and changing.  At that time, not the monopoly that we have now.

No, it was what/who was going to replace what.  It really was a race. Everything changed, all the time.  And it was exciting and frustrating....and just a part of life and I have to say, as frustrating as it was, it was a ride not to be forgotten.

I almost had (forgotten) until I just finished watching "Halt and Catch Fire'.  I always say that I know more than the average person about computers through osmosis.  Living with a tech/programmer for over 30 years.  But I am ashamed to say that I had to ask him what the title meant. Without missing a beat, he gave me the answer.  That man never ceases to amaze me.

So into this show, we went.  It is funny how much of this we could both relate to.  Took me, cannot speak for him, right back to the mid 80's and early 90's when we both were working in computers (he a coder, me the person that impressed my fellow co-workers with my computer knowledge through osmosis from the husband.)  I just finished the last episode, and it made me wax nostalgic and ... 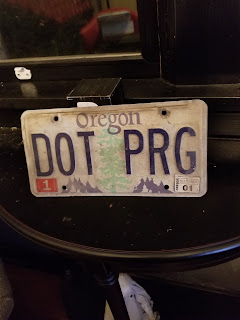 These are the licenses plates of husbands car from 1989 until the late 90's. After a few years living in Portland in the late 90's,  dBase was all but forgotten and in these days of almost all popular PC programs ending in .exe.

Here is a trip down memory lane for my programming friends. Who remembers when some programs ended in .prg?

As decreed by Chris 'Frog Queen' Davis at 3:59 PM No comments: