Can I has a (vegetarian) cheeseburger?

Husband is right, I am obsessed with

(If you don't get the captions, it helps if you check out lolspeak)

It is a website that has cat pictures with humors captions contributed by visitors. Why am I so obsessed? It's fucking funny! I love cats, and Funny * There are hundreds (likely) thousands of pictures out there......yeah, I should be doing something else!

How do you get obsessed with something?

Hummmm, well for me it has always been a problem. I tend to get that way, I am definitely a "fan"atic type person. If I like something I(used to) collect as much of it as possible (budget allowing). In the 80's it was Kate Bush** stuff - I have boxes (many boxes) of CDs, vinyl in many sizes(for you youngins' they are those large wax disc that your club music comes on), posters, fanzines*, press releases, books, CD singles, collectors CD singles. magazine articles, newspaper articles, videos (NTSC and PAL)***, laser discs, and DVDs. I did say boxes didn't I? :) ****

I did the same thing with Marillion/Fish, XTC*****, all the Finn Brother's incarnations (Split Enz, Crowded House, ALT, etc.) Toad the Wet Sprocket (and the pieces that they broke into), Tori Amos, Human Drama and The Cure. Imagine even more boxes!

And most of this was before the internet was popular, that's right I am talking Record Collector magazine, ads with hundreds of items in 6 point type and no PayPal - just money orders!!! Just showing my dedication to my cause ;)

Then we have my concert t-shirts, comic books, Nightmare Before Christmas, Clive Barker, Terry Pratchett and Neil Gaiman related collections******! The comics are in boxes, but the rest is in the library - I ran out of boxes.

I decided a few years ago that: more is just that, more.

So these days I am unloading many of my collections. If it is not useful or means something to me. It goes in the eBay pile - and some of it has actually been on eBay, although from the pile in the basement I know you would find that hard to believe. Do you know how much a mint pink vinyl copy of Under the Pink is worth these days??!? I was surprised too!

As a rule - all bets are off when it comes to books - so Clive, Terry and Neil are safe; I am keeping them. (In a jar with holes in the top :)

Imagine Jeff's (initial) happiness when I got obsessed with a website. No boxes or eBay purchases! Just a lot of insane laughing coming from the office.

Some of my favorites at the moment:

Husband is now a bit tired (understatement) of hearing my comments on the funny thing I saw on the site or how something reminds me of what I saw on the site......if I thought he was tuning me out before, I know he is now.

* Funny is a noun in the Frog Queen's English.

**Since almost no one in the US has even heard of her, they had to be imported from the UK - back before PayPal - I had to get money order in foreign currency, get IRC coupons (don't know what they are, don't worry about it), go down to the post office, fill out the paperwork for foreign mail, and wait in line to send it. You really had to be a fan to do this....every year.

*** I had to invest in a PAL video player too! The expenses never end!

*** *In '93 I was lucky be that I was actually in the UK when the Red Shoes came out and I got to see full window displays in all the music shops (almost made me cry it was so beautiful!), I got to collect all the stuff that the stores were handing out (and actually hear a Kate song on the radio, while it was on the charts - playing RUTH as a classic on stations now, does not count.)

*****Remember everyone "Andy Partridge is a god."

****** Not to mention the collections that I don't like to admit to, like Hercules and Andromeda (I am a sucker for a guy with long hair that is half naked (all naked works too!)- so for Hercules it is Kevin, for Andromeda, it started as Kevin, but then I saw Keith! Oh lordy! (Looks like the letter "K" might have something to do with it. ;) In defense, both shows have the funniest outtakes!

This is why I find it hard to blog - it's that right "word/words" thing.

How clever! Blogging with pictures (mostly) ...

http://pumpkinrot.blogspot.com/
As decreed by Chris 'Frog Queen' Davis at 2:16 PM No comments:

Funny how one thing leads to another, and another.. and how that title sounds kinda dirty - :)

I have a friend who wrote (another) book (quite funny; the books and the friend) and there are "Jazz Hands" references, so those words have been on my mind - I mean, they were there before, but not so much so.

Anyway, that same friend recently did a piece on NPR - also quite funny (again, both the friend and the piece) that talked about breaking into song - no reason, (like you need one) just singing to sing.

Mind you, he meant everyone else, if he heard me sign, he would recommend I stick to the shower to save all of humanity.

So again, another thought that was on my mind. (I know, some of you are surprised that I have a mind - but not as surprised as me :)

That brings me to last Saturday. We were working on props for our book, particularly the Flying Crank Ghost (the must have of all yard haunt props - really, the haunt police come revoke your license if don't have one) - and Jeff asked me to come over so he could trace my hands.

Now, we have done this many times, we have made several of these props, and they all have these "hands" that are cut outs of my hands - my "jazz hands" to be exact. I am going to put that in the book: 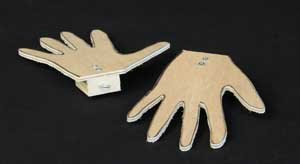 "To make the hands for your FCG, place your hands on a piece of 1/8 plywood and do your best Jazz hands impression....."

To top it off, while working throughout the day Jeff kept singing show tunes - yes, Jeff know more show tunes than a straight guy should :) 25 years of marriage and no kids. Should I be worried?

So it was a Marc inspired day - reminded me that I really, need to finish that book. That is if my cat stops sleeping on it long enough for me to nab it.
As decreed by Chris 'Frog Queen' Davis at 9:09 PM 1 comment:

I once read that the secret to a rich life is to have more beginnings than endings.

I have a friend who is doing a lot of "beginnings". Everyday he tries something new . I am not that ambitious. He is a genius, or partly insane, likely both (and decidedly creative.)

I was inspired. (This is usually where things go wrong.)

I resolved to, and told everyone that I would, start my own blog, and so should the rest of my non blogging friends. (I enjoy lots of company.)

In February, my (thoughtful - or more likely bored at work) husband who maintains our blog volunteered to get me started. He logged on, created my account and set me loose. (He usually knows better.)

While he was at it he started his own blog. (Danger, Danger Will Robinson :)

Shortly after that, I pestered a friend of mine to start blogging, to share her wit with a wider audience. Not only is she blogging (for a while now), but she can draw (I hate her :)

Until today, I did not have my own blog.

Well, that is a bit of a fib. I have had the blog for months. Every once in a while I pull it up, change the design, tweak it, but never post.

I did realize that I cannot, in fact, draw a frog on a pumpkin. I bet I could carve one out of foam!

Let the fun begin!
As decreed by Chris 'Frog Queen' Davis at 5:13 PM No comments: