I knew she was evil

Anyone fancy a movie?

I brought the special popcorn!!

Next we make popcorn.....I am so getting out the camera.....this is a great picture.  Going to make me look at a trip to the movies a whole new way!
As decreed by Chris 'Frog Queen' Davis at 4:32 AM 9 comments:

The 2012 Home Haunter DVD is almost done and we are taking pre-orders. 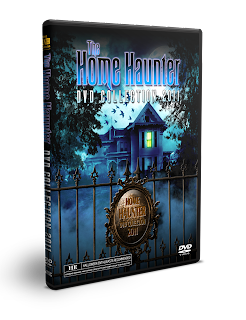 As of today there are almost 75 haunts in the collection!  You really have to see them.

We have kept the price the same and are still offering "scholarships" to those haunters that cannot afford a set.

Check out the web site for more details.

And big thanks to Nic at Hi-RezDesign for designing the perfect cover!!

Next....finish the set and get it off to the duplicators and revamp the website....no rest for the the wicked! :D 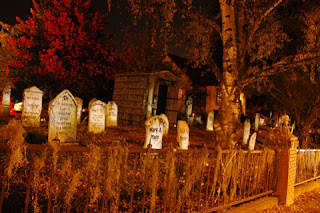 We had a meeting with crew this weekend and it decided.....that (put deity name here) we are going to replace the 6 year old crypt....it looked good at the time....but now it makes me chringe when I see it....

Haunters are so cool

We want to say special thanks to the 2011 Home Haunter Awards judges.

These are all previous winners of an award and a talented and generous group that loves haunting as much as we do.

We just want to say thanks in advance to our judges....we know that they have a difficult task ahead of them:

Thanks to all this years and the past years judges.....and remember it is not too late to submit.  We will be taking entries until midnight this Friday, February 18th.

Looking forward to seeing all your haunts!!
As decreed by Chris 'Frog Queen' Davis at 2:51 AM 6 comments:

The nice way to put it would be

....I find it more of the light and the dark side.

I have been busy working on projects for two different people.....and they could not be more opposite!

Here is the brochure for our neighborhood association........ 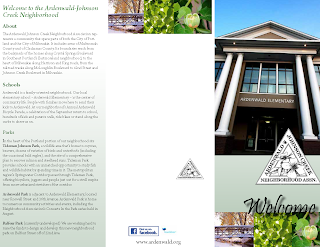 And here is the one for HAuNTcon..... 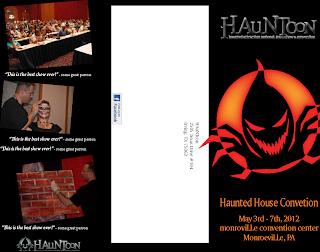 I know what you are thinking.....that neighborhood brochure really puts me over the edge to the dark side.

I need to go make something with skulls on it to get my world back to normal...... :D
As decreed by Chris 'Frog Queen' Davis at 2:47 AM 2 comments: 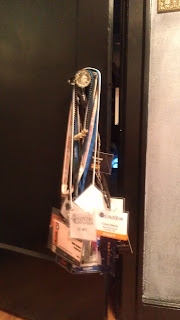 Sure I think.....as I walk to the door of my office and look through the large pile of Halloween convention badges hanging from my office door.

I am looking through the HAuNTcon tags and notice that not all of them have a year on them....not something I notice at the time....but seems pretty bloody important now!

I grab this one and tell him.....I am pretty sure this is the one.

Which at this point tells me I am pretty sure this is the one.....cause I remember very little from the convention last year, because I spent most of it in a room carving and painting.....and when I was not there....I am sure you could find me and the crew in the bar! :D

So we are working away and husband hands me one of the new badges he is working on (with super cool QR codes on them) and I go to put it in the holder, that I am guessing is from last year, to see if it fits......I pull the tag out and start to LOL....

For those of you that were there last year........you will completely understand why we laughed....yep, there was no doubt that is was the badge from last year.

....we were so busy carving that we did not even notice that the foam was flying......everywhere!!!

We will be back at HAuNTcon this year......and hopefully, not tethered to the Make-N-Take room like last year......after that experience we have a new plan. :D

I want to take a moment here to thank the DG crew.  We sold them on attending the convention and how cool it would be......but they spent most of the time in the same room we did and did not see much of the convention....that is dedication....we appreciate your help.  We could not have done it without you....

....so, here is to a less "foam filled 2012 convention" - although Leonard is asking us to do another Monday workshop......if we can find a way to dry monster mud in a few hours, we could use a lot less foam!!!

So how about we extend the date

We noticed that a lot of haunters had not submitted videos for this years Home Haunter DVD collection....so we thought we would extend the date and give you another week to send us your videos.

We also updated the time length, we were asking for under six minutes, but we know that is hard for some people and we do not want to discourage anyone for participating.    So we will try to accommodate any time length (within reason.....I mean 30 minutes to an hour....is practically a movie - and that would be a whole different DVD collection :D)

So for those of you that procrastinated (like me - our video just got done....just) it is not too late to share your creations with the haunt community.

We know that many people have their videos on YouTube - if you cannot send us a video and the only way you can get it to us is from YouTube, we will try to download it, just know that many times the resolution is too low for DVD quality, so it might look fuzzy...really fuzzy.  But just like the dark making things look better...fuzzy might be a good thing....hummmm....I might try that on our video :D

And, I should stop to say thanks to all you great haunters that submitted your video before the deadline...you rock!

Oh....and we have the judges (previous winners) all ready to hand out shinny skulls to this years winners!!!  Trust me, it looks really good on your mantle :D

Thanks everyone, now back to prop building!!!

Ah, I do so love living in Portland, Oregon.  We have a strange town here, which suits me right to the ground.
(For those of you that have seen Portlandia....yeah, that show about sums us up :D)

So in typical Portland fashion, one of the local ballrooms is hosting a special event for Valentines Day called Valloween.  Halloween and Valentines day mixed together.....could not think of a better way to celebrate valentines day!

Check out the details here....wish I could go, looks like a great time.
As decreed by Chris 'Frog Queen' Davis at 5:31 PM 10 comments:

You know when you hear something

and even though you have never heard the sound before.....you know exactly what it is.

Anyway, tonight I was sitting at my desk trying to design a brochure when I heard this sound, I had not heard it before, but I knew that it was the sound.....

...of a small pumpkin rolling around on the hardwood floor in the living room.

Now, even though I knew what it was, I had no idea how said pumpkin made it to the floor.

I mean my cats are just as resourceful at getting something from impossible places as the next cat.  But this particular set of pumpkins has been hanging from some curly willow branches in a vase on top of a bookshelf for a least a year. Safe and sound.

Without the cats standing on top of each other (which would mean "teamwork" - which I am almost certain in not a word in cat language) I really do not know how they got to it.

So, I head out of my office to rescue it and see it rolling across the floor......not a cat in site.

Hum....that is odd, I pick him up, and it is indeed one of the pumpkins I thought it was, I look up to the branches, and see that it is indeed missing....but still no sign of a cat.

Maybe I have a ghost....or said pumpkin is possessed (I did get it from Bean, so I imagine that could be an option....she is very clever) and managed to get down by itself and make a run for the heater vent, likely trying to escape from the cats.

And see another small pumpkin come rolling out from under the couch....the one I check under for a cat just seconds ago..... 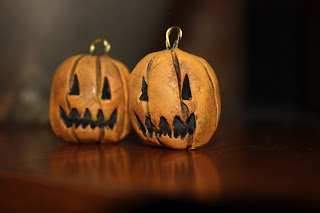 I am now a bit concerned....I actually have six of these pumpkins......if I turn around and find them all gone....I am going to believe that I stepped inside an episode of the Twilight Zone and get on the phone to the real estate agent....I have seen too many ghost stories....if this house ends up being haunted....I will miss the house.....but I am moving. :)

Quick look and a count and looks like I am safe.....at that moment I am distracted by Hal who comes shooting out from under the coffee table and bats the poor pumpkin in the kitchen.

Okay, that mystery is solved......but I still do not know how they got up there and got them down.....maybe cats are just magic.

Not feeding the cats

is never an option at our house....not if you like your blood inside your body :)

That would sound so funny

if you did not know us.

We say that a lot around the graveyard during build times.....

"Do we have enough skulls" would probably get me a visit from the local police if I mentioned it in a restaurant.....but those things happen all the time at the graveyard.

On that theme - our good buddies the Bloodshed Brothers posted a great vblog post.....you have to check this out.

My favorite is the footage of the entrance to the hardware store (Home Depot) - oh my god....I so know how that goes....in the summer I am sure my car can drive itself to Home Depot :D

Check this out.....you can thank me later :D


We have been bugging everyone endlessly about submitting videos for the Home Haunter DVD collection.....I guess we better do our 2011 video.

Every year I go back and forth with husband about not including the whole yard in the video.....but he says "everyone has seen our stuff, so we should just feature the new stuff."

Although I don't agree......I do imagine he is right. So - finally after lots of photo collecting and marriage counseling....you have the 2011 Davis Graveyard video.

In case anyone missed it.....we built a ruined abbey.

Or I should say we tried. It is not near as complete as we would have liked (or should I say, I would have liked) - but I guess that gives us something to do this year. :D

So here it is, not perfect, but it is what it is. Which is actually quite amazing....

Thanks to everyone that helped with this project. We really do have the best crew on the planet, this would not have happened without so many people giving up almost all of their free time.