Husband and I are 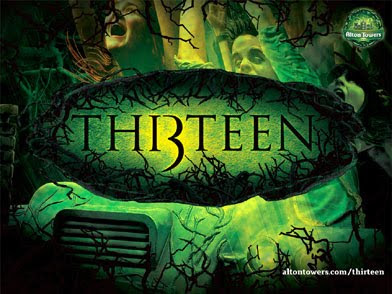 disagreeing (which always happens when I switch into "crazy mode") and I blame it on Pumpkinrot :D He posted a picture from the new Thirteen ride, and we both had to learn more. To some people, finding that the ride was in the UK might have been disappointing, but not to me! I am headed over there in November - so I think, sweet!!! - we are going!!
It turns out not to be that easy.....our trip will take us to Scotland, because we that is my home (well, at least in my mind), and then we are going to head down to the west country Bath, Cornwall and Wales. So will be at both the top (area) and the bottom of the lovely island....and wouldn't you know it? The park is just about in the middle. *&%$!!!!
Husband says no way, it will waste a whole day, but I am looking at train schedules to see how I can get there from Bath (which is a bit of a trek)....I have seen the Roman Baths, Stonehenge and the chalk hills several times, and they are stunning, and I highly recommend that you see it if you are out that way.....but I have not seen this ride. I really want to see this ride. Does this not look like the coolest rollercoaster ever?!
For some reason he thinks I am being completely unreasonable wanting to go to an amusement park when there is many other things to see :D (I know he is right....but I really hate to admit that :D ) I know this quest is madness and very silly - I would say that this is definitely the epitome of a frog queen folly! :D

Yeah, you should all feel sorry for him, putting up with my craziness is not easy. He deserves a metal or something :)
What might quash the whole thing is that it might not be open when we are there.....not all their rides run in the off season. I have an email in to them asking about the schedule, but since it looks like they are busy working on the grand opening of the ride in March...I don't imagine I will hear from them anytime soon. At this point they may not even know if it will be running in late November.
So I put a tickler item on my to-do list for July to check back with them :D Yes, I know I am insane, you should all know that by now....and I am fine with that.