While I am in

a bad mood, I might as well bring this up. (my self loathing kicks into high gear whenever I have to spend time with my family :D )

As I have posted before not everyone likes the Davis Graveyard display or me for that matter, but that is cool, everyone is entitled to their opinion - just like I am entitled to mine :D
Is this not the most wonderful world! :)
So to show it is not all sunshine and roses here at the graveyard (or my case tombstones and skeletons), I will share with you a not so flattering review from last October from one of the larger free publications in our area. :(
To be fair, and all things being what they are, I know that my display is not very interesting for people from about early teens to early 20's - we are too family friendly and not scary and thus uninteresting to the bulk of that age group, which is the primary haunted house attendees. This is one of the main reasons, husband and I have no aspiration to create a haunted attraction. I really have no desire to adjust my style to that demographic....personally I like it, gore and jump out monsters are fine, I have no problem with them. I love haunted houses, but it is not something that sparks my creativity.
So when every you are talking about Davis Graveyard in the same context as a haunted house, we are going to fall short. I appreciate that they even include us, but it usually does not bode well for us in comparison :)
Well, this particular paper/magazine, the Willamette Week, is definitely for the hip crowd and they were none too kind to us. So about now, I am having flashbacks of being the un-cool kid in high school again :D
Davis Graveyard
8703 SE 43rd Ave., Milwaukie, davisgraveyard.com. Dusk-10 pm Sunday-Thursday, dusk-11 pm Friday-Saturday. Free.
Davis Graveyard is not a haunted house. Officially, it is an elaborate yard display, with special effects thrown in on the weekends. Unofficially, it’s just a cluster of cheesy tombstones, fake cobwebs and blue lights. Sometimes there are creepy noises, but overall, it’s the opposite of scary. It’d perhaps be a nice surprise while trick-or-treating (especially since the Milwaukie High School dance team will be performing “Thriller” Halloween night), but it’s otherwise not worth the trek to Milwaukie. KATE WILLIAMS.
Pants wetted?  Only when my car got stuck in the mud.
Scream level:  Sesame Street.
Zombies spotted:  None, but there will be several dancing zombies on Halloween.
Worst failed attempt to frighten:  One tombstone read, “Hold my beer and watch this.” If only I had been holding a beer.
Okay, it could be worse, and actually I am not too affected by her not liking it, like I said, that happens, we are not for everyone. Being a scream level of Sesame Street works for me. I like Sesame Street - that made me smile :D 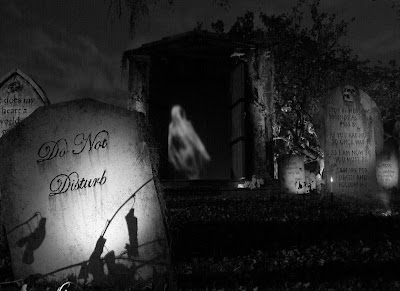 What does bother me are a few things. Calling 60 tombstones a "cluster" is a little insulting (but I guess in comparison to a real graveyard, that is fair), there are no blue lights in the display and come on, even if you stretch the truth a bit, not all of the tombstones are cheesy :D
But the "officially" and unofficially" statements - basically she is saying we are exaggerating in our description.....wow, I mean I am in marketing and exaggerating is something I will have to say I am familiar with....but in this case, I thought "elaborate yard display" was more than a fair description. And saying that one of the largest displays in the nation is not "worth the trip to Milwaukie" hurt a bit. Just so you know, the houses across the street from me are in Portland, so basically she is saying the display is not even worth crossing the street for :D
"Some special effects thrown in", yeah, nothing too special, just 5 video effects, custom lighting system, animated skeleton and spider, video and mechanical ghost effect (preacher), and custom sound track depending on where you are at in the display. Yeah, we just threw those in. I mean we just had them lying around..... :D
And, yes, I did notice that there was a lot of mud in front of the house before Halloween, so I did have a couple loads of bark dust brought in, some of those little expenses for the display that I forgot to budget for :D
She is 100% correct, the fake webs I bought last year sucked, they did not stretch very well, I actually took a lot of them down. After whining a lot, I now have a great web gun (and a friend that LOVES webbing) Problem solved for next year - No more fake webs for the graveyard.
Well, the "Hold my beer and watch this" tombstone has never been one of my favorites, but other people like it. So I have to thank her for finally giving me a reason to put it in the back of the yard! :)
On that note, Kate, if you ever come by to visit the display, just come on up, I will be more than happy to offer you a beer :D
So what's a girl to do? I was recently talking to someone about how my being in marketing works with the graveyard, and this is a perfect example. I could have sent an email out to our list and asked everyone to contact the Willamette Week....but working with media like I do, I know that this will likely offend the person that did the review, so if they did not like me before, after that, they would likely not cover me or give us an even worse review next year. The best thing to do in this case, just ignore it.
I just remember that we make this display as a form of expression, and there will always be someone that does not like what you do. Just part of life.
As decreed by Chris 'Frog Queen' Davis at 2:31 PM