internet down spider in the kitchen adobe still sucks

That is the message that I text to husband last night.

You see, I was working in InDesign for a few days and just found out that the data import I wanted to do, was not going to happen the way I wanted it to.  I was going to have to do it the hard way.  Unhappy Frog Queen.

I was home working on Hauntcon stuff and the internet went down....damn, I am really behind, that sucks. Even unhappier Frog Queen.

So I think, I will go in the kitchen and make some food.

Opened the fridge and saw the strawberries, I will chop those for dessert.  Husband will be so happy.

So you can imagine my happy mood, thinking how there is no way to be in a bad mood while making dessert.

I was so very wrong.

Let me take a small detour here to say that unfortunately for you blog readers I have had very few spider incidents in the last 6 months.  I am happy, but the blog is less entertaining.  I should have known that could not last forever :)

While I am chopping, Dor had just manged to make her way into a very large box on the kitchen floor, only a few feet away from me.  She had be trying to get in the box all day and seemed very happy that she managed to jump high enough (finally) to land inside.

Happy Dor, everything was now right and good in her kitty world.

So there I was chopping strawberries, almost done and I grab one of the last ones and 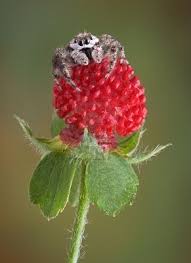 A spider crawled across my fingers and onto the cutting board.

The neighbors a few blocks away had to hear the scream.

A now equally terrified Dor launches herself straight up and out of the box and managed to turn left, mid air and fly (literally) into the living room.

While the spider, likely as terrified, b-lines it for the safety of bowl on the other end of the counter.

I b-line (I might have flown too.....can't remember) it to the other side of the kitchen.

Mason and Hal peer, with looks of terror on their faces, around the corner to see what the hell is going on,  Mason attempts to walk toward me.

Hal looks at Mason as if to say "Listen buddy, I know that scream, that is the spider scream, it is best if you do not go anywhere near the crazy woman for a while, just saying."

Mason still looking at me is thinking "You are right, she does still have a knife in her hand, and it is clear her mind is gone.  Best ride this one out in another room.  Let's go find out what piece of furniture Dor has wedged herself under."

They both turn around and walk back into the living room. Shaking their head muttering "we go the short straw, with her.....I am sure there are owners out there, not near as crazy.  We sucked in our past lives."

I walk back over to and rescue the berries, drop the knife in the sink and head into the office.

Husband came home and looks for the spider.

I am never going in the kitchen again.