The heads are just too big

on the blow mold Paul (or now Paul 2) skeletons.  The rest of the body is better, it is lighter and can handle the heat.  Our Bucky skeletons warped over time in storage, are heavy and difficult to move around and just became more work than they were worth. 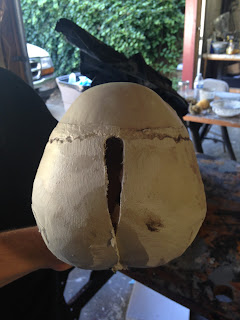 So we changed to the blow mold skeletons......but the heads on those things look like aliens.  Every time I would use one for a prop, I would replace it with one of our heads modeled after the original Bucky skeleton.

Now that I have several skeletons in the yard, I did not want them looking all the same.  What to do.  I suggested just heating it up and trying to mold it, kinda squish in the head a bit. (Yeah, yeah, I know how this is sounding.) Then one of the brilliant crew had a better idea.  Cut out a chunk of the head and shape it so it looks more human.  Then we filled it with cheap A-B (2 part) expanding foam an sand down the seams and cover them with Fix-It. 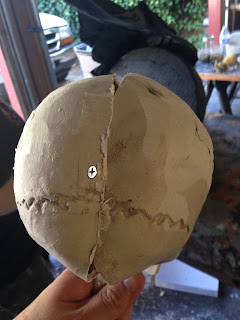 This is how we did the head for one of our current props,   Kiss of Death.  Here is the WIP on that section of the prop.

So now I have a way to work with the existing Paul heads.

Note, we also cut out or sand all the seam (mold) edges, just to clean them up.  Sometimes when you do that you actually make a hole in the skeleton.  This technique of filling it with expanding foam works great to fix that problem also.


On a side note....if you thought Paul was a cheap, poorly made skeleton.....the new one Paul 2 is even worse.  And, yes, I know that is almost impossible to believe.
As decreed by Chris 'Frog Queen' Davis at 2:42 PM