As you have guessed, I am a sucker for

ghost tours. They are one of my favorite things to do.

Odd, because I am a big skeptic and don't actually believe in ghosts. (I know, gasp!)

But they are entertaining. Especially the UK tours where you also get a history lesson. And I do enjoy historical lessons that involve graveyards and ghost stories.

In London we have visited many haunted places, one of the most famous being the Tower of London. You can hear this story on the regular Tower tour, not officially a ghost tour, but with so many beheadings and murders inside those walls, might as well be.

All nicely in contrast around some very big diamonds (this is also where the Royal Jewels are kept - the sparkly ones...I believe the Queen and Camilla have Charles'.)

Ghosts of people executed in the tower walls include:

Ghosts of people murdered in the tower walls:

Henry VI (stabbed to death while he was praying, that is low)

The sons of King Edward IV went "missing: after their father died in 1483. The bodies of two boys were found under the a staircase in the white tower during an excavation in 1674 are believed to be theirs.

So, who is haunting where?

Lady Jane Gray - probably the most famous ghost, is often seen in the Tower Green.

The sons of Edward IV haunt the "Bloody" Tower, named so for their murder.

Thomas Moore, I believe is in Utopia and has no need for haunting. (I know, I know, that was terrible and I apologize :) 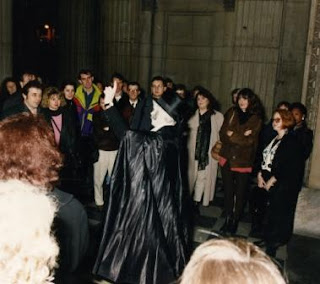 And there are ghost tours aplenty in London. Then there is the graveyard tours of London, old graveyards, plague pits, churches full of tombs and memorials - endlessly entertaining.

Then there are the MANY and I do mean many Jack the Ripper tours. Not all that "ghostly" but definitely creepy running around the Whitechapel area at night - not a bad neighborhood (any longer) but anything is creepy with a guide telling you murder stories.

There are ENDLESS and I mean endless theory books about who Jack the Ripper was. Every guide for any tour we have been on, has written a book, seems to be a pattern.
I know I have pictures at home, I will see if I can find some tonight to post later.
I need more tea (cause they will not let me have wine with lunch at work :)....we will save Edinburgh, Scotland (and it's many, many tours) for another day.
As decreed by Chris 'Frog Queen' Davis at 12:29 PM