the City of the Dead, ghost tour in Scotland.

My favorite ghost tour in Edinburgh. That is saying something, because there are a LOT of them.

Oh, I have been on ALL of them, at least twice, per visit. :) Over all the trips, it is embarrassing to admit how many tours I have taken :)

I would go to one every night I was in town if husband would go. Some nights he wants to see plays or other things :)

The trip before my last one I went on the City of the Dead Graveyard Tour 4 nights in a row, I traded off with different people in the group to go with me different nights, that took care of three of them. The forth one I pulled the "it's my birthday" card for that one and made everyone go with me, and buy me drinks!

So for my birthday we ate dinner at in the Secret Garden at The Witchery (reportedly haunted) and then a ghost tour - that was my second best birthday. (Best birthday - I will save that for another blog entry, it involves ghosts too!) 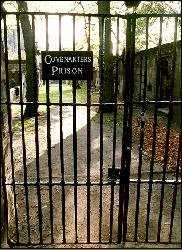 The City of the Dead graveyard tour is one of my favorites because it visits the Coventers Prison where the world famous McKenzie poltergeist is rumored to be. By many accounts it is one of the most haunted places in the world.

I am not sure if it is the energy of all the people crowded in the mausoleum while the story is told or if there is actually something going on. Either way - one of my favorite things.

I prefer this one over the Mary Kings Close or Vault tours, precisely because most of the tour is in graveyards. The City of the Dead tour office is in a house in the cemetery. I want an office in a cemetery! How great would that be :)

The bulk of (the most interesting bit) takes place in Grayfriar's cemetery. Here are so 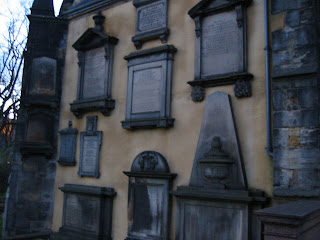 me pictures of it during the day. 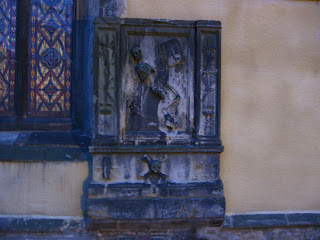 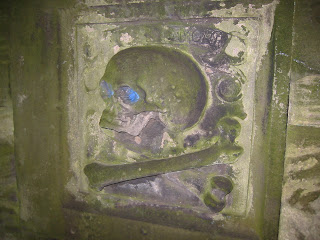 There are many mason graves in this small cemetery, you can note them by the skull and bones symbol on the walls of the mausoleums and the tombstones.

The story that is told for why the area is so haunted is that years ago the tomb of "Bloody"Mackenzie was desecrated and some people took his skull. I believe it is back now, but I guess it was too late, he is pissed and has taken to haunting to pass away the rest of eternity. (You know, if I was going to break into a tomb, if someone has the nickname "bloody" - I pass it over and pick the one next to it. :)

In life he was responsible for the death of some of the Jacobite up risers (those loyal to the Scottish Tutor rule of Britain) He kept many of them locked up in an area of the graveyard, where the Black Mausoleum resides. He left them there in winter with little food or water....and to make a long story short (which is hard to do with a Scot, trust me:) he eventually had many of them shot. You can read the whole story here if you are interested. 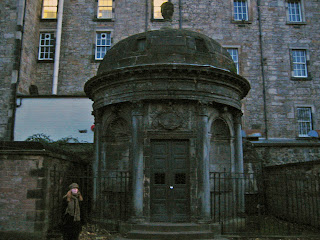 Here is his tomb, very impressive, I would enjoy recreating it, but as you can see, it quite large, and my yard is not. Mackenzie’s tomb (not the place that is haunted) the gravesite of the specter that haunts the black mausoleum - which around corner in the old coventers prison.

Yes, the red head standing there is the Frog Queen. And she has an unhappy look on her face, because she is FREEEEZING. And scary, but mostly freeeeezing.