After all that work

on the Halloween Party invitations and the great work on last years Christmas cards....you thought I would really come up with something smashing for Christmas last year.

You would be wrong.

I whimped out and used the photo we took of Stonehenge in the snow last year.

It is a lovely picture - and it was a dream being there....but I don't think it translated into a card too well.

Husband and I worked on an all-encompassing-audience friendly write up on solstice celebrations throughout the years.  You have to be careful with history, there are some people that are really touchy when you point out that Christmas, as a celebration, is a bit older than they would like to believe.

But then those people believe that dinosaur bones are just rock formations. (Yeah, we have a few of those in the family, and they do not particularly like our Halloween obsession.)

So I put glitter on the front where the snow was....how can you be offended with a card with glitter on it :D (don't answer that!) 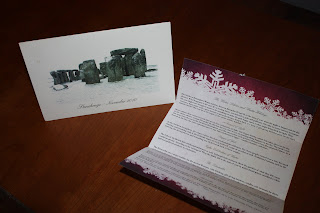 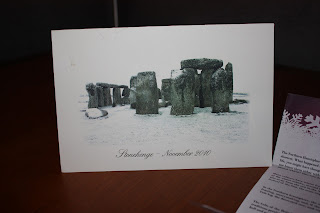