I would have never 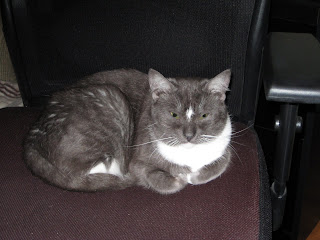 And her brother is Mason.

I don't think there was a Mason in Finding Nemo.

But honestly, who would name a cat "Dorie"? Must have been a five year old.

I hope it was a five year old.

How does one come to acquire a cat named Dorie?

Well, it is a sad start to the story, I had a cat named Maddie. ~Wait, Maddie is pretty normal, where did she come from.~ For the record, I wanted to name her Mothra. (Go Godzilla!)

But I lost the vote.

So Maddie was at the vet everyday for about 6 weeks. My house husband took her in and had to sit next to a cage with two very cute kittens in it. Yeah, I would have caved too. :)

So one evening we pick up two kittens. They are named Dorie and Mason.

"You can change their names if you want" they said as we walked out the door.

Dorie was changed to Door (from Neil Gaiman's Neverwhere) before she made it through our door way. (Pun intended :) From that she has been:

Door stop, door way, door knob, and my favorite - door bell. She is a little dingy.

My sister calls her "aDorable" She is pretty cute :)

But her official name is "Dorie what are you doing?" (Usually followed by a loud crashing sound.)

I am not sure if it is because I spent so much time with her when she was a kitten, but she loves me.

If I hold her, she will let him pet her, otherwise she makes herself scarce around him.

That has never happened before - all the cats we have had either tolerate both of us or love husband.

They say that animals are a good judge of character, that is why the other cats liked husband better. It is no surprise, everyone knows that he is the nice one in the relationship.

So I guess that makes Dorie a good judge of evil? :)
As decreed by Chris 'Frog Queen' Davis at 2:42 PM