Besides the full Davis Graveyard. There are other graveyard ideas I would like to try in other parts of the yard. These are displays that will not likely be seen, so they would all be "Chris Follies"
I thought about recreating famous grave markers. HP Lovecraft, Poe, Vincent Price, Boris Karloff or just other notable figures (the very tall Celtic cross for Flora McDonald would be on the top of my list!) I have done a bit of work on it, I have seen the actual graves of some people I would like to recreate - but most of them are monuments and are massive in scale. So I would need to research actual graves (not just the monument) and see if they exist and create the "Famous Graveyard"
I recently finished "The Graveyard Book" by Neil Gaiman. Throughout the book he mentions 12 - 20 gravestones and a ghouls gate. I am a fan of his work and graveyards, so it is an exciting idea to me to actually create the graveyard from the book. I could ask permission, but I won't.
In my back yard I have a large weeping willow - which I love and hate (that will be another blog entry) that is perfect for a graveyard. A friend of mine (who knows these things) informed me that willows on gravestones are usually used for the death of children. Creepy and sad.
I think this area would be a great place to take the idea very seriously and create a very old graveyard and monument wall in the backyard.
I have a vision in my mind of a cross between the graveyard at the ruined abbey in St. Andrews (top) and the Greyfriars graveyard/kirk (bottom), Edinburgh (both in Scotland). I love the tall moss covered (ruins/cemetery walls) that are covered with monument plaques that are almost unreadable from age. This graveyard would have no "clever" tombstones. I want this one to look "real." 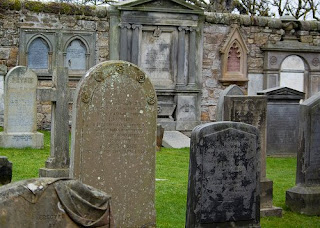 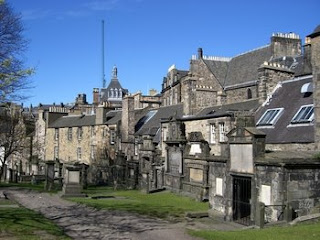 I was also equally inspiredby the graveyards at both Stirling Castle and a small graveyard outside Roslin Chapel on the way down to the castle ruins, and one of the most memberable things I ever saw was a graveyard, walled off in the middle of a sheep field on the Isle of Skye, oh, and then there is New Orleans.....but those are for another day.
:) As if I have the time.
As decreed by Chris 'Frog Queen' Davis at 4:27 PM