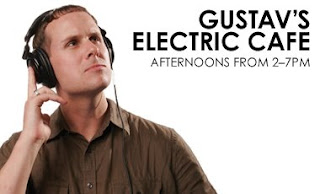 I finally got around to sending my perfect play list to 94.7 a few weeks ago, and the ultra charming Gustav had me come in on Halloween to share. No big deal? Well, . . . . .

#1 - it was Halloween evening, I should be at the yard helping set up. So husband had to do it all on his own*. :(
#2 - Don't care for public speaking. I can do it, you know, on the small office presentation basis, but knowing that there are a LOT of people (well, I might be flattering myself a bit there) listening, scary!
This is because I have to be nice and say nice things....not the first words that come to mind. Filter must be installed AND working!
I was sure I was going to die.
But Gustav was patient (like he had dealt with nervous people before :) and we got through it. He helped me promote the Davis Graveyard so we could get the people out there and raise money for the dance team and share our creation with the masses.
Oh, and let me play a few songs. I got to play Kayleigh by Marillion! Fish is one of my favorite songwriters!! (Sugar Mice is my all time favorite!)
Afterwards, I know, most of my friends were saying...."Really, a Kate Bush song, only one? Really?" ;)
Even though I made it through the broadcast, I totally blew it because some friends of mine were in the building on another station talking.....a voice in my head said "It's Friday, you should ask the receptionist if Marc is here".....nah, that would be silly....and I really should be going. Given another opportunity, I would have likely said "fuck" on the air - or something as hugely embarrassing.
I drive away and turn on the radio....yeah, he was there, I could have crashed their party too :)
*BTW - Things have been working great all season....until Halloween night - we had to change out a projector for the talking head and the graveyard ghost blew her amp!!! So by the time I got home....Jeff was missing me :)
As decreed by Chris 'Frog Queen' Davis at 2:09 PM