I had to crawl around

in the crawl spaces in the shop this weekend to dig up decorations that I spent hours putting away last month, thinking I would not need them again until September. But it happens that I needed them for the West Coast Haunters Convention party this weekend.  So I spent part of yesterday pulling tubs in and out of the spider infested crawl space.

I guess I made too much noise banging tubs around and attracted the attention of the spider horde that has made their home there.

Once the spiders found out I was up there, they all grouped together to scare the living *&^% out of me.  I hit my head on the low ceiling a dozen times jumping out of the way or brushing them off of me.

I hate them....all of them, even the fake ones.  They got me a few times too!  I think a group of real spiders got together......picked up a plastic spider and dropped it in front of me just to see if I would fall for it. 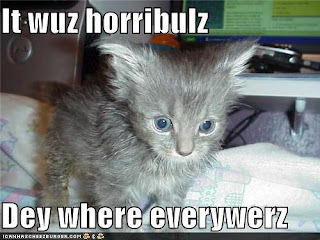