The battle of the Tuxes

The Davis Graveyard household is comprised of more cats than humans.

Two Tuxes - Hal and Mason.....and one gray and white cat called Dor (Dorie) - who for the record, normally the lead trouble maker in the house....but tonight it appears her brother was tired of her hogging the limelight.

Mason and Dor are brother and sister....although you would never know it.....she is really small and he is a really, really large cat....twice her size and about 1/3 bigger than Hal (Halloween).

He is basically a small, domesticated panther cleverly disguised in a tuxedo.

The Davis Graveyard cat politics are endlessly amusing to husband and I.....after we have had a bottle of wine......

....without "medication" it is just a lot of yelling at what ever feline is causing the trouble.....which, as I mentioned,  is usually Dor....

I was getting my pumpkins in order.

Now, being the Halloween person that I am you would be safe to assume that I meant that in the same reference as getting your "ducks in order".  Which would be clever if that was the case.

I was going to try to get my collection of ShellHawk pumpkins in a row and tarted up for a photo for my friend....the famous ShellHawk....but I forgot something.

The household is mostly comprised of cats, evil, trouble causing cats....they outnumber the humans, so how could I forget.

I would say it is because they sleep at lot.

My cats....like most house cats in the universe are bored and always looking to amuse themselves....mostly, I mean always, at my expense.

Tonight was no exception.

For the record, I told Shell....her ceramic pumpkins are trouble makers on their own right....that is why I keep them in separate rooms.....they fight constantly if they are left next to each other.

So why would I risk this?

She posted on her blog that someone took of  their collection.....all four of them together, smiling and behaving - I was inspired - she in turn,  asked for others to send their pictures, which meant me getting all mine in the same room - which for the record....I knew was going to be a bad idea.

I collected mine from  their various prison sentences (I mean display perches) from around the house and got them all together on the coffee table.  They were being surprisingly good all sitting there ......wow....I was impressed....I should have known they were only quiet because, unlike me, they were aware of the "cat politics" going on the sofa just a few feet away.

They must have been scared.....and I should have too.

But I was stupid and let my guard down and thought....."you all sit here (cats included) while I run and get the tripod for the camera that is in my office."

Simple request.....I mean my office is just less then ten steps away.

I learned that chaos.....was only about seven steps in fact.

That is when I heard it.

It went from a growl to a cry to the sound of crashing in less than five steps.......which was enough steps to put me back in the living room to see Mason and Hal mid-fight jump from the sofa to the table......sending everything crashing.

....after renaming both cats to more appropriate (for that moment in time) names that surprisingly both begin with the letter "F" - I went to access the damage.

...as I got closer I was relived to not see, lots of orange pieces on the floor.....the pumpkins were intact.

I collect everything and realize that I am missing something.....

Using my (truth denying) imagination I think......well, he must be hiding under the table - I mean that is where I want to be when the tuxes start fighting......

Kinda the sound that a small ceramic pumpkin would make if it was rolling around.

What if the small pumpkin was really full of Halloween magic and animated itself in a last ditch effort to escape and it is rolling to safety in a corner.

Yeah, I have a really weird imagination.

But in reality, I know that the "rolling" sound is the result of a newly hyphened-named cat that forgot he should be hiding from a very angry frog queen.....instead could not resist because "something moved so I must bat it with my paw" even though I will give up my hiding place......

I look under the couch to find (F**king)-Mason, that is in fact going to be his name for a while, looking at me like a deer in the headlights with a pumpkin in his mouth.

Now, anyone that has ever met my (F**king)-Mason cat will tell you he ALWAYS looks like that - if he was human, let's just say that he would be the good looking football playing frat boy crushing beer cans on his head.....you can imagine how proud I am.

As a "fur" mom, let me just say....I could not be prouder of my "kids"......and it just reminds me how grateful the universe should be that I did not have actually children. :D

Anyway he can tell that I am mad....so he tries to jump from under the sofa and onto the back of a small end table...with the pumpkin......

....he is agile and makes the leap.....but like one of those moments in a heartbreaking football game as the star quarterback drops the ball....I hear the pumpkin crash to my floor....which is unfortunately not made of grass or AstroTurf.....but not-bouncy-unyielding hard wood...which is pretty.....but as I am to learn, not safe for small ceramic pumpkins.  (If I write a letter as a concerned parent (of a ceramic pumpkin) do you think I get them to put a warning label on the flooring packages?  "Danger.  May cause damage to ceramic pumpkins"? - No, me either.)

So to get what I imagine will be a pile of pumpkin rubble, I move the couch and see a helpless and scared pumpkin laying face down on the floor......

I pick him up, put him on the table and get ready to take the picture.

...I mean I have gone to this much work.....it would be a shame to give up the adventure at this point, so the picture is back in the plan.

I appears that the small pumpkin did not make it out without lifelong scaring......... 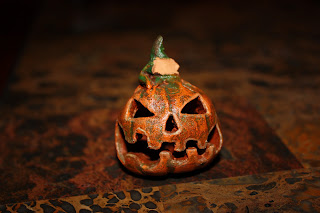 ....on further reflection......I should for the record let you know that in the back of head I am thinking....those other two pumpkins grim an awful lot....it is likely this is not Masons fault and the other two larger pumpkins devised this whole plan with Mason to kill the small rival pumpkin......at least this is what the small pumpkin says (in-between sobs).....the two large ones are denying everything, saying "he hit his head, he does not know what he is saying....."  Yeah, I think I used that story on my mom a few times ......if I recall correctly....never worked on her either.
As decreed by Chris 'Frog Queen' Davis at 2:50 AM