I have no right to

complain about any TV show, because I do have the worst taste in TV shows. So for all my friends that emailed me with comments about how much they love LOST, I guess I should fess up. 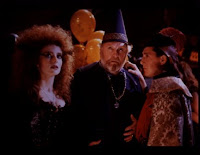 My favorite TV show, ever is Friday the 13th the Series. I know, how terrible is that? Pretty terrible :) Bad acting (or lack of) simple stories.....but I love the idea and the shop was cool!!! It came out in the 80's, and it looks like it. It did not age well, but that has not stopped me.


Anytime it was on I watched it, I had most of the shows on VHS.

Then, amazingly, the Chiller channel started running it again so I TIVOed all three seasons! Then one day as we are arrowing through the list I notice these ! notations next to my shows.

"What does that mean?"

"Oh, that those shows are in the que to be deleted if we run out of space."

You have got to be joking! I was panicky about losing them....I would be like "how do I set these so they save and do NOT get delete because we run out of space!!" He shakes his head at me, grumbles and grabs the remote and mutters something under his breath about "I can't believe I am doing this, I thought you hated TV."

I told him that I heard there were books that explained how to hack a TIVO so you can get to the hard drive and get them.

"I am not hacking my TVIO so you can copy your shows!"

"Really, your not much of a geek if you are passing up the opportunity to take a gaget apart! What is wrong with you!"

I pleaded my case several times, I never won that battle.

I tried burning them off on to DVD, but that meant that husband had to watch them all and fast forward through the commercials to record it. He managed to do one episode and then told me that he couldn't sit through another episode. I was SOL, "just leave them on the TIVO."

What is this feeling? Wow, so this is what it feels like not to get my way. I don't like it. Not at all.

So I go on my unhappy little way and then one day.....

We redecorated the living room, that meant we upgraded the TV and satellite system which required us to get a new TIVO box. WHAT?! But my shows are on the old TIVO box!! Can we move them? What do I do? Gasp, did someone suck all the oxygen out of the room?

"I am not hacking a TIVO to get your shows"

Once again, strange feeling, the one I have been able to avoid since last time we talked about this.

"Fine. I will leave the box out until we find a way to get them out of there."

"Okay, so how do I negotiate between two TIVOs?"

"You don't, you will have to unhook the new one and hook up the old one when you want to watch the shows."

You are kidding, right? - I start to protest, he walks away.

Once again, not happy with how this is going.

(It is decided, he is sleeping on the couch. )

One day he says "you that show you like is coming out on DVD?"

Secretly, I am sure he was just about as happy as I was to see that come out on DVD - now that I think about it, this probably saved our marriage :)

I went to Amazon and put a order within 10 minutes.

I had to wait a month or so for it to be released.

I have watched it at least 3 times from start to finish so far.

Season two comes out later this month, I know, have it preordered.