if it was at the open house or the fundraiser. But someone asked me "Since you have done this graveyard has anyone close to you died?" Now, I am standing there with about a dozen strangers looking at me as I am trying to decide.....

Do I want to answer the question or not and if I do, is my answer going to bother (horrify) anyone standing there. I know these people are fans of the graveyard or they would not be here, but how do I explain this and not sound too crazy.

And a part of me was not sure if I wanted to share this with anyone outside the crew.

"Why yes, I have, it is for my grandmother, I lost her this last February, I made a her a tombstone. It is out in the yard by the grave keeper, the one that is a memorial to WWII Women Welders." 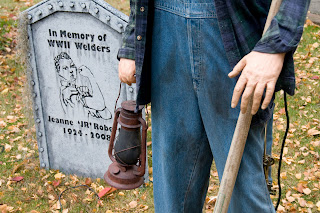 I look around, hoping that I do not get a "gasp!" or "oh, really" from anyone. Cause, I will seriously not be able to take that. Luckily, just kind smiles. (Makes me think that I should not be so worried, not everyone is like some of the boring people that I work with.)

I continue with "She would be thrilled, she spent many a season with us out here painting tombstones and carving pumpkins. I have a few pictures of her here on one of these "how we did it" boards (I point out the pictures.)"

The lady that asked me smiled and said "that's great, glad to hear that so much of your life is in this display."

I am thinking, you have NO idea :)

It has been a year since my grandma died, and I miss her very much. She was definitely one of my favorite relations. She had a great sense of humor and amazing life. Not your typical grandmother, I don't think she baked a batch of cookies from scratch in her life. :)
But she was interesting! She could tell you entertaining stories of how she met Abbot & Costello when her father was running a theater (and how they gave her $5 - which is like giving a kid $100 today), how her father worked with Al Jolson, the stories of her mother's Italian restaurant, how her grandfather was a grave keeper (I know!), managing the USC art school in the California desert mountains (where husband and I met)......some of her best stories were of her days welding during the war. Anyone that met her, could not easily forget her.

She loved telling jokes. So in honor of my grandmother. Here is her favorite joke that she told at all our Halloween parties.

A lady's husband dies and she goes in to make arrangements. She talks with the owner and he tells her that they will take care of whatever she needs for the funeral. He tells her to take a look around and let them know if she sees anything she wants.

She looks around and sees an open casket with a man in a handsome brown suit.

When she returns to the owner she lets them know that she really likes the brown suit on the man in the other room, but her husband did not have a brown suit like that.

He says "no problem, he would be happy to take care of it." When she comes back, her husband will be in a nice brown suit.

She goes away and comes back the next day to make further arrangements.

She notices another open casket with a man in it with a striking blue suit.

She tells the owner that, although the brown suit is nice, she wishes she had seen the blue suit. That one is perfect.

"No problem" says the owner, we can make sure he is presented in a striking blue suit.

She is so impressed and grateful.

"Thank you so much, are you sure it is not too much trouble?"

"Not at all," says the owner, "we just have to change the heads."