It goes in cycles

I was commenting about The IT Crowd and talking about UK TV shows, and one of my all time favorites.....yes, you are going to groan, is Red Dwarf.

I was sick for a few days and not feeling like doing anything other than sit in front of the TV for a while. So, since the special "Back to Earth" was just released in the UK (and I ordered it) I thought I would watch some of the original series. 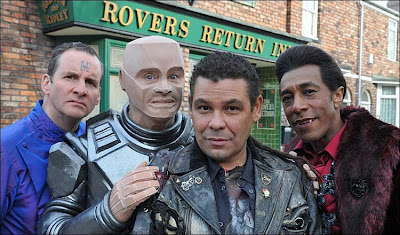 Although I love most of the show, quirks and all! BTW, for all you horror fans - there are lots of "monsters" in it...including my favorite and "Lister's worst nightmare" the vindaloo monster. LOL!

Season 2 holds two of my favorite things.....my favorite story line Queeg and my favorite moments, the one that made me go...."hum, this is not your normal Sci-Fi sitcom, is it?" - the famous Tongue Tied song and dance number.

Tongue Tied has 4 different (that I can remember) versions for your viewing pleasure. The original from the show, the uncut version from the show (which YouTube keeps deleting), the music video (yes, it went to #17 in the UK charts) and the famous clay animation version (also no where to be found on YouTube). Ah, it is hard for me to pick a favorite.

Here is the video version.


The diehard fans, including husband are appalled that "Backwards" or the scene with the shrinking boxing shorts are not my favorite . . . . I do like them, but Queeg is my favorite and I do love a silly song.
As decreed by Chris 'Frog Queen' Davis at 5:00 AM