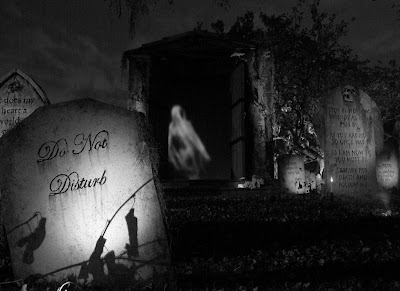 That is a direct quote from a friend of ours who got the Haunters DVD set.
She says, "Did anyone see the Davis Graveyard video? Weird as Hell!"
Well, now that you mention it. I suppose it is.
It is just what happens when you know that you have no chance of winning an award and you need to get something out there to represent the yard. The sad truth is that there was so little usable video footage this year that we really had to chop and hack and piece together what you see, many of the features of the yard are missing in both photos and video. Part of the reason you get to see set up and take down images. (Normally pieces we keep for the crew - the ones that might actually care to see that part :)
Husband was just humoring me by using Christopher Walken reciting The Raven, because he knows I am such a fan of Poe and Walken :)
When I asked what about Vincent Price (and he knew I would)....he told me that his version was over 10 minutes......we don't really have enough material for the 8 minutes of our current version.
- hum....not what I wanted to hear -
I think the thing that drives husband the most crazy when we are creating the video is me asking "What about video/pictures of _________?"
He takes a deep breath and says "We don't have any."
Which is always followed by me saying "Really, are you sure?"
"Yes, really." He says, as nicely as he can, for the 100th time.
We do this for days until I finally resign myself to the fact that this is the best I am going to get and once again resolve that I will get better footage next year......which never happens :)
I think I am going to add a "filming/photo" night to the calendar - a weekday night that I don't advertise to the public - when we turn on all the effects and focus on filming and photography. I think it is a great idea!
If husband is reading this blog....he is going to kill me :)
As decreed by Chris 'Frog Queen' Davis at 1:07 PM