For those of you the have been the HAuNTcon without a doubt, you knew "Fluffy" - Lance Oxyer.  He dressed up as a psycho in a straight jacked and a muzzle....big and scary. 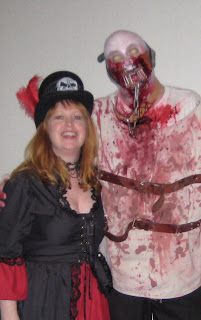 For as scary as "Fluffy" was, Lance, the man behind the mask, was a sweet and interesting guy.

I say "was" because he passed away yesterday.

Took everyone by surprise, husband and I were both stunned and saddened.

Anyone that has been to the HAuNTcon costume ball has a picture with Fluffy or two or three....he was definitely an icon at the show.

We always chatted a bit each year, said the usual "hellos" and found out how our Halloween from the previous year went.  But this past convention we got to know him better this last year because he took our books and skull class.  Thinking back, I remember he was late for the class because he had some medical problems, but when he did show up he seemed fine and had a great time with the class.

As with all HAuNTcon classes you get to spend a lot of time with the students and everyone tells stories of their haunt and their life.  Lance stayed after class with us and we talked for quite a while.....I am glad to have had the chance to get to know him better.

Just another reminder to be kind to each other out there.

I think I might make a Fluffy tombstone for the yard this year. Maybe, need to think about that one....I think so, my grandmother's tombstone could use some company.
As decreed by Chris 'Frog Queen' Davis at 10:55 PM