I scanned the audience

to see if maybe Bruce headed up to Portland to check out Evil Dead the Musical - but I did not see him anywhere :(  But I was at the first show, so he might have made it to another show.  I am sure he has seen other productions....but this was the first one in Oregon....I know he lives at the other end of the state (5 hour drive away) - but still, he had to be a bit curious :)

Anyway - had a great time - very funny, the songs were good.  It was silly and quirky.  And being a huge fan of the story...I had to see it just on principle.

The show opens with them all driving up to the "cabin in the woods" - cute upbeat song...the perfect song to start that show....just cute enough to set you up for everything going horribly wrong.

Immediately they start making fun of horror films.  The song "Evil Trees" - "Mother always said when you hear a life threatening sound coming from the dark woods you should not wake the others and go out and investitgate alone." (those are not the lyrics....exactly...)

Then, What the F**k was that is probably one of the best songs of the show.

There are a few more songs and then the show really hits its stride with the song "Look who is evil now" - sung by his sister, the first person to be taken by the curse.  The actress that played her was the best in the show.  She looked like she was giving it 100% all the time....and her character has some of the best lines and songs.

The next song about Jack is clever and funny and actually makes a bit of fun of the original movie.  Glad that they were not being precious.

The next song "I am not a killer" is another Ash number.....and I begin to realize that charater has great lines...but his musical numbers suck up to this point.

Bit Part Demon - makes fun of the throw away characters in all movies.  Made me smile....but not very memorable.

The next song "All the Men in My Life (get killed by Candarian Demons)" - is funny and one my favorites of the show.....

"Do the Necronomicon" - brilliant song sand all the zombies dancing all disco....ROFL!

Between the songs....as you can expect, all the good one-liners are in the dialogue.  If you are a fan, this is a must see musical, even if you don't like musicals!

All in all I would say it was a great time.

The only thing.....is that I know it was supposed to bey "campy" so some of the bad props and the amateur acting and tech effects could be attributed to that.  But in the back of my head I have to say that honestly, it just seemed a bit lazy. Like "oh, it is supposed to be campy, so we will not worry about the bad sound or staging." Could be just me....but I thought the production could be a bit better.

That said I did see the first show and they had four more to go (they added a third show on Sunday since it sold out so fast!) So, maybe they worked out the kinks.

I would have to say if you sat in the splatter zone, you were likely very disappointed.  The "blood" was just pink water....and the timing of the people "splattering" - was a bit off.

But like I said - great time!  And would definitely recommend it if there is a production in your neck of the woods.....sorry could not help myself. :) 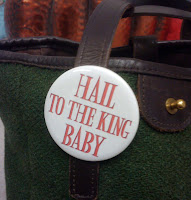 Got myself this cool button...it is on my purse handle at the moment....in my head I sing "What the F*ck was that every time I see it. :D