we have been texturing foam for years.....we have used just about anything that will "dent/destory" foam that you can imagine....and I a few I hope that you never imagine :D

Yes...I really hope you never, ever do :D

Where was I?  Oh, yeah, garden tools.

We have three or four different types of stone that we are trying to create in the abbey - large stones and the bottom and smaller stones as you get to the top....we have pictures of an abbey build this way - so we are going with it.  That and it gives us a chance to try differnent styles.....and it looks cool!

So the bottom has to be large stones.....large stones that do not look like the larger stones above it, just larger....they need to look like a different type of stone, that said, we need a different techinque.

And like I said, we will try just about anything :D

Including a garden rake.

Yes, a garden rake.  I wish I could take credit for this stroke of genius....or insanity, sometimes they look sooooo much alike :D

Anyway - we are texturing the large foundation stones with a garden rake. 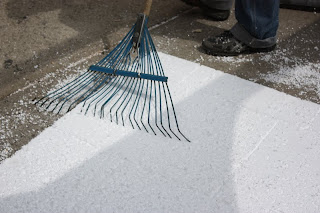 You just whack the hell out of the foam and it makes large pitted pieces in the foam....looks pretty cool actually.

You will have to trust me cause it is hard to see in this picture. 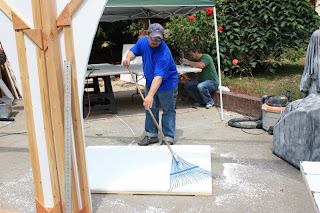 But it is cool......and boy does it give you an upper body workout!

I am brilliant!  But not as brilliant as Toph who came up with the idea!  Thanks man, that was cool......really cool....but you know what is cooler?

The tool Dan made for the smaller areas that need the same pattern (where the rake was too large to use) - now that.....that is scary cool.  Really not kidding there.

It is really scary.

So scary that the original was destroyed by husband cause he thought someone would hurt them selves.