Now we can start

working on something else....like getting back to that book we are supposed to be writing :)

We have finished the 2009 Davis Graveyard DVD. We create them each year as a thank you to all our helpers and the dance team. Every year we make a few extra copies and put them for sale on our website.

We always have lots of extras, but this year, despite the purposeful lack of TV media content, for the first time, we have filled the disk. When ever I wonder what it is that we do all year, just have to pop this disk in the DVD player and go.....yeah, I forgot we did that, oh and that too!

Anyway, I will give one away here on the blog, I will even throw in a Davis Graveyard t-shirt. Just leave a comment on this post and I will draw a winner next Monday.

I also have them for sale in the Davis Graveyard store along with the last four years. (I will have special pricing for anyone that wants to buy all four...wow, you must be really bored.)

I have been asked a few times about the classes, we do take pictures during the class, but they are in no way a how to. We have had a lot of requests for a video version so we are cooking up a plan for this year so we can share it with the world outside of the Portland area.

Besides the Easter egg and the endless pictures of Halloween Cat, this DVD comes with a new Davis Graveyard folly.....husband and I did a commentary version of the video. Fun, but we realised that next year we will have to have the whole crew over and some adult beverages and create a really entertaining version for 2010. 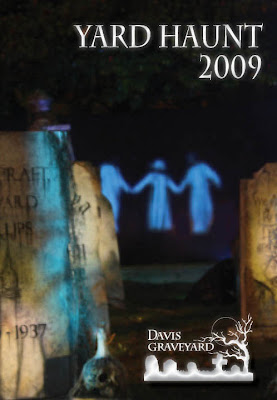 So, we are off to work on our other projects like the convention and classes that we are teaching this year.....and that darn book.....it is my number one priority, well it will be after I finish this wine auction event for work in a couple weeks....it will be nice to have a life again. :)