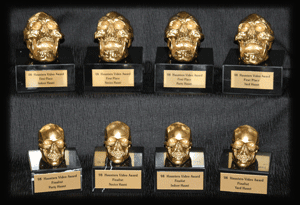 along nicely with the Haunter's Video Awards. Husband confirmed with Ghost Ride that the awards will be shipping to us shortly and Propmaster is getting ready to send out the preview DVDs to the judges. Once again we have a great panel of judges and we really appreciate all the time they put in (watching all those DVDS) to help choose the winners.

Thanks to them and last year's judges who helped us understand that we needed to make a few adjustments to the awards, the first one being expanding the categories.

We added several new categories for 2009 - here is the complete list.

With all the amazing prop building going on out there, we knew the judges were on to something when they recommended that we feature exceptional props both static and animated. There were also haunters that just produced astounding videos, worth an award in their own right.

I think every noticed that some of the more advanced both in age and expertise might be making it hard for more of the newer haunters to compete. This one proved to be a difficult one and husband and I have LOTS of discussion about the feedback and how to best handle this in a way that was fair and easy for not only the haunters, but the judges. So we created four new awards that we call "Vanguard" awards. This will pull all the recognized haunts (and we all know who they are) into one group to compete amongst themselves and allow the other haunts to not have to compete against someone like, lets say, The Davis Graveyard, who has been haunting for 11 years and has an army of immensely talented minions at the beck and call of the Frog Queen - LOL! Sometimes I just crack myself up! Anyway, my blog, I can do that sometimes if I want to :D *

And big change...last year we thought it wise to remove the judges from the awards. In hindsight, not the best idea we ever had, so this year, everyone (with one obvious exception) is included in the awards, judge or not. Everyone puts a lot of work into their haunt and then to take the time to judge....I felt it was just unfair of us to exclude them for their kindness :) So I apologize to all the judges last year, I messed up, sorry :)

I know that I am not explaining that perfectly and I do not in any way at all, no-way-even-a-little-bit-want-to-offend, or-appear-to-offend any haunters. We are not trying to say that any group of haunts are "better" than any other haunt....we are just trying to level the field a bit. And it is the judge's discretion who goes in what category, we did not divide the haunts up at all. We want to keep this as fair as we can.

The down side :( In order to accommodate all the new categories we have limited the trophies for the runner up awards (just too costly to product 22 awards, with plaques and mailing them out.) So this year we are going to create certificates for all the runners up. Special thanks to Haunted Attraction Magazine for sponsoring the awards this year and offering a free subscription to all the winners (definitely helped my budget! :D) and to Ghost Ride for creating the awards and providing them at a great discount. Also thanks to the Haunters Convention for also providing free tickets to all the winners.

Cool, we have never had prizes before! :D Hopefully I can get more for next year. 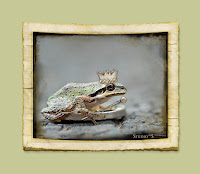