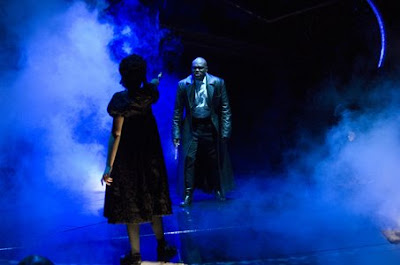 death, wine and Music Man.
Took our annual trip to Ashland Oregon, home of the world famous "Oregon Shakespeare Festival" and a LOT of wineries!
Saw four plays this weekend and three of them had, in one way or the other, a strong theme - death.
Death and the King's Horseman - Nigerian play about how the British and the African cultures did not understand each other. Brilliant play.
Dead Man's Cell Phone - Sara Ruhl play - I have seen all three of her plays, this being my least favorite....which is saying something if you ready my review of (her version of) Eurydice.
Then the murder filled - Macbeth (pictured). What is not to like! I believe it is the shortest of his plays, lots of death and blood and bodies and just some of the worst people you could ever meet. Actually, scarier than many of the haunted houses I have seen.
This version was quite dark and bloody, and there were bodies all over the apron of the stage - Macbeth's severed head displayed atop a sword was disturbing (in a good way!) Oh, and the witches were great....they even did a mirror set of witches, three old scary witches and three younger, more Goth looking witches that would follow on stage after the old witches left....no exactly sure the purpose? But I liked it! What is not to like about more witches :)
and....as if in perfect contrast; Music Man. Yes, the old American musical. Honestly, it was my favorite of the weekend. Could be because the summer that husband and I met at an art camp, that was the musical performance of the year. We heard the rehearsals for it all summer long. Kind of have a soft spot for it now :) Everything on the stage (including the costumes) started out in tones of gray, and they added color as the play went along....you must know by now how partial I am to that monochrome color scheme :)
If you want a more professional review...check out our friend Marty's reviews for The Oregonian.
Visited our Halloween friends at Darkwing Manor - The Baron and Mort were gracious hosts as always..I would move in her house today. It is gothic decorated Victorian....amazing. I still want to be Mort in my next life.
Drank a lot of good wine (with one exception) and brought home more than I intended. I have never been much of a white wine drinker, but this round I tried everything but the Pinot Gris (just can't drink that one) and I working on expanding my (wine) horizons. I don't think I brought any white home...but I did taste them. That is a start.
Still prefer my wine red....the color of blood. :)
As decreed by Chris 'Frog Queen' Davis at 11:51 AM