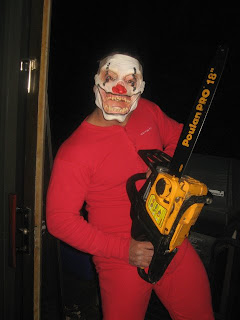 We drove about 45 minutes to this place, Round Lake, I believe and pulled up to a miniature golf place, off to the side of the sign I saw a simple "Haunted House" sign with an arrow pointing left.

Not only was this a miniature golf course, they also had an arcade section, a pizza parlor and a bowling alley....next to the bar, and...in a building behind it....you guessed it.

We were all hungry so we opted to have pizza first...or something that resembled pizza :) Lucky for us, the pizza dining area was right next to the bar.

You might be thinking to yourself....wow. she mentions a lot of drinking at Hauntcon. Not near as much as actually goes on :)

There is a reason that classes do not start until 10:00 am on Sunday :)

Back to....eating first was a mistake, because the second bus arrived and decided to walk through the haunt first. So, when we got done, we had to wait for them to go through the haunt....5 people every 10-8 minutes or so....there were about 175 of us! Anyway, they were through and had gone in to eat their pizza and back out before most of us got through the haunt.

So, to the haunt.

I have to say that the opening scene was very promising. A lady is talking about this "pet" experiment she has over in the cage. He is screaming for someone to let him out. Then she goes bezerk and asks if we should kill him. We all answer yes, mostly because we know that is what she wants us to say and this is going on forever.

Then she runs in the cage after him and pulls out a gun and shoots him in the head.

Yeah, that was disturbing.

I was trying to remember if there was a sign outside about not bringing in small children. That experience might cause the need for therapy later.

I am thinking. Wow - if that is the beginning, I might be wrong, the rest of the haunt is going to be something quite different.

First off, the separated me from the group. I actually volunteered when they asked for someone. I have been through these enough to know to volunteer, or we are all going to have to wait for them to "pick" a victim.

I take one for the team. Just get us moving!

So, the rest of the haunt is me being stalked by very good actors in great make up pushing me through the haunt. Most of them got too close for me.

I found myself in my mind saying over and over again....some of these guys need a Tic Tac! Especially the smokers! Yuk!

I am not a big personal space person, I understand how these work and I would never shove anyone in a haunt, never.....but I thought about it at least a few times. :D

I felt bad as things went on because I was just laughing.....I mean how many times in my life can I be followed by a scary clown and expect to be scared. Really people!

So the haunt is just a maze of rooms, with all the same situations..... just like every other haunt you will ever see.

It was not horrible. It was just completely unoriginal. Saw nothing new.

I got chased out by a guy with a chain saw.

And some people wanted to stay for the lights on tour!!! Crazies!!

So we did not get back to the hotel until after midnight. The bar was closed.....but the Hauntcon suite was open :)

Yes, I purposely left off the name of the haunt, it would serve no purpose to tell you. If you are going to Wisconsin and you email me, I will tell you the name so you can avoid it.
As decreed by Chris 'Frog Queen' Davis at 1:53 PM