holiday movie used to be Scrooged (and Die Hard....still one of my favorite Christmas movies :D ) 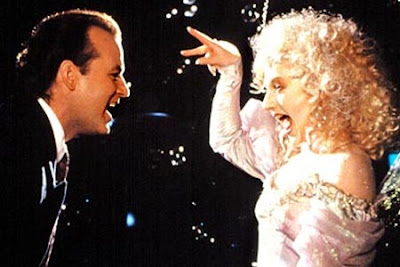 If you have seen the reaper with the TV in its head in our display, you will know where the idea came from :D

It didn't age too well, but I will never get tired of seeing Bill Murray (or anyone for that matter) get hit in the face with a toaster! Cracks me up every time.

So, that was my favorite until a few years ago.

I have to say I was a bit worried when I heard the news that they were making The Hogfather into a movie.... 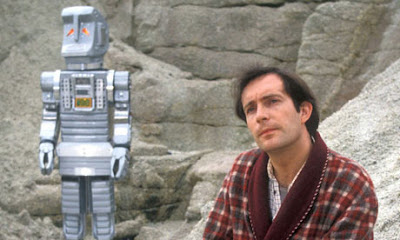 I mean this could be a complete disaster, a bit like the original Hitchhikers' Guide to the Galaxy (not the one that came out a few years ago...the series from the 80's). I know there is a certain charm to it...but I really did not want that BBC charm/cheap to come anywhere near this story

or any story by Terry Pratchett.

When I heard that Sky was going to do The Hogfather as the first film adaptation of a Pratchett book I was not sure what I was feeling.....anticipation mixed with a lot of fear..... it went something like this....

Oh goody, finally a Pratchett movie!
Oh, no, someone is going to *&^% up a Pratchett story.

Oh, goody, it is not an American film maker (I just don't think they get British humor)
Oh, no, I just had a Hitchhikers flashback

Oh, no, it is from Sky and not BBC very confused.....can barely keep from falling over....I feel happy and scared about both sides at the same time.

Then there is the fact that Rupert Murdock (one of the owners of Sky - not the literal sky...but I imagine that is only a matter time) may very well be the devil, or a close personal friend. :)))

This also, good and bad....maybe he stuck a deal with the devil to make the best movie ever, anything is possible, right?
Then I keep remembering that this is guy that created Fox News :D

As I go back and forth in my head I think it would just be better if I just left his works to my imagination....I am not going to watch it (cause it is not coming out in the US as a major release anyway.)

Then it happens. It gets great reviews!! Shite!

I have to find a way to get it here in the states. That is why I love Amazon.co.uk and my multi-region DVD player :D

I order it shipped overnight from the UK months before it airs here in the US. 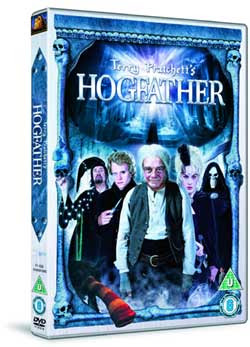 If husband would have told me it arrived...I would have left work early to come watch it.

I have to say I love it. I just love it.

It is everything I could have hoped for in a Pratchett movie!!

I mean there are a few things that bother me....not completely in love with who they chose for Susan, but I can live with it. With repeated watching's she is growing on me. 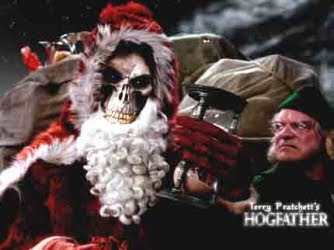 But what I really liked is that they did not over explain things. If you have not read the book (or any Discworld book) then some scenes might be a little odd. But as an avid fan, I am thrilled that the details were there (the rats were a perfect example.) Thanks for showing us fans some respect, you don't get that from film makers much these days. :)

And although you cannot fit all Terry's wonderfully funny bits in one movie....I think they did a good job, and his cameo is very sweet, he seems to genuinely be enjoying the project.


If you are a Halloween fan,you should see this Christmas movie.....a movie with the Grim Reaper (Death) playing Hogfather (Santa Claus)....how perfect is that?! :D

This promo is a bit long, but worth watching.