Or...The Story of How Hal Almost Died.
The other night when husband is working on my video and our videos for the DVDs and Pinnacle is starting to give him grief, and it is late.....so he (and I) are a bit stressed.
Hal, who seems to be a bit unhappy that he is not the center of attention, hops up on top of husbands brand new computer where he can be directly in our line of sight, and ....
shuts off the computer!
Yes, the power button is on the top of the computer....when he jumped up there, he just put his little paw on it and, poof, power is off, just like that.
I can see the look of horror on his face as he realizes that the file was likely not saved.
Husband cannot believe it....he looks at the computer, tests the power button, to confirm that yes, Hal did in fact just reboot the computer.
He was, let's say...just a little "unhappy". :)
I grabbed Hal off the top of the computer, as fast as I could......... to make sure that he lived to see another Halloween. 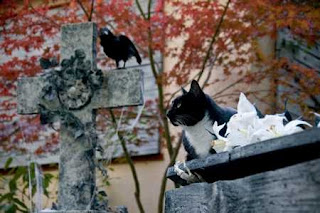 That was close Hal, really close!
As decreed by Chris 'Frog Queen' Davis at 8:00 AM