No, it is not April Fool's Day

and this is not a joke, I have not been abducted by a cult or anything....I just have an evil idea.

As all my evil ideas do.

So I bet you are guessing where I got the one way ticket to crazyville? Here dear followers is a small glimpse into the madness that is my mind.

I decided to change my angel prop into something else...wings had to go, after the third version, we had attached them so many times, that there was just no way we could put another set on her. She was having none of that.

You know when you go to give a pet medicine and they see what you are doing and hide under the couch...she did the same thing when I attempted to put the wings back on.

It was funny to see a huge foam statue try to wedge herself under the couch :)

So, since she was holding a sword, I thought I would make her Joan of Arc.

She was happy with any idea that did not involve wings.

So I mentioned this on my blog and a very talented and helpful blogger named Pumpkinbrain who speaks French (one of those brainy bi-lingual Canadians) offered to help me with the project.

First, he gave me the correct spelling of her name, important detail, one I would have likely missed without his help. He then gave me a quote from her in both French and English and then he researched and provided me her family crest.

Talk about getting the details down! Wow, all I had to do was print it out and start carving!

We emailed back and forth and had a really good time working on a prop long distance. I am claiming it as the first international Halloween prop - ever. Might not be, but I am in marketing and claiming truth in untrue things is like breathing to me :D

That project turned out to be one of my favorite things last year. And it got me thinking that I would enjoy doing this again next year.....but what to do? 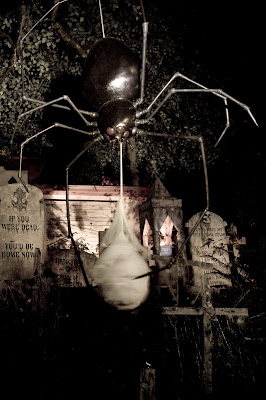 Then it happened! We created a new spider....actually when I say we, I mean Dan and Elyssa, very creepy, freaked me out.

The way it was hanging it reminded me of the nursery rhyme for Little Miss Muffet. Like this giant spider hanging down to "sit down beside her" - that nursery rhyme always creeped me out. What are you trying to do give a little girl nightmares!!!


And thought......oh, you know what would be really scary? Lots of spiders hanging down to sit down beside her.....that would not frighten her away....it would frighten her to death (okay, I might be projecting a bit!)

So, would it not be cool (and terribly scary) to create a whole bunch of spiders hanging from a tree and put a skeleton in a fluffy pink (or some other ghastly pastel color) dress and have lots of spiders hanging down? Like she was scared to death and had been rotting away in the yard for years...... 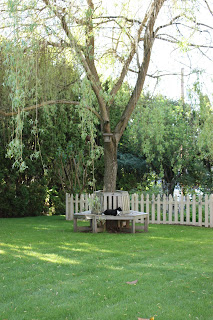 Wonder if anyone else would think that is creepy?


Hey, maybe this could be my group Halloween prop idea?

Whoa, what, wait a minute.....did I just come up with an idea that will ask haunters to send me spiders?

Me? Frog Queen who is likely more famous for her arachnophobia than her yard haunt?

This is it boys and girls, you are witness, this is the moment that the frog queen officially goes insane.

I, the Frog Queen, being of (decidedly) unsound mind, asks my talented, good looking, brilliant and great taste in blogs haunters to make and send me creepy spiders (creepy was redundant wasn't it?) for this "group Halloween prop" project.

What I want to do is hang as many spiders as I can from the branches coming down all around her.

I will create the dead Little Miss Muffet to sit on the bench under this tree. What exactly are "curds and whey" anyway?

Basically, I want to create my worst nightmare.

And I will ask my friend the talented and beautiful friend Marci to take pictures. I will have them printed and sent to anyone that adds a spider to nightmare.

Create anything you like, just keep one thing in mind, it rains in the NW - a lot , even if we have a dry October, it will get wet at some point.

And if you think that I get all the fun....don't worry, I think we should share. My vision is to do this every year at another haunters house.

Kind of a flash yard haunt. All the props show up and bam! Instant display! What haunter would not love that!

Okay, anyone with me?

Anyone?
As decreed by Chris 'Frog Queen' Davis at 9:47 PM