One of the many reasoons

that I love my friend Mort (Tina) from Darkwing Manor is her sense of humor.

So, we were at Frightfest Northwest this weekend for just a few hours to drop off their Vanguard award from the Haunters Video Awards and visit for a little bit (we were not hosting it this year...too much going on.)

(now, just in case you are thinking....that is odd, Darkwing are friends of the Davis' that put on the awards.....we have judges to that, we don't do not pick the winners....really!)

We got there just in time of the "Prop Off" (build a prop from misc items) - and we found that this year the kids were excluded from the competition (they won last year) - I think the logic went something like "how can we compete with the kids, they will always win" or something like that. 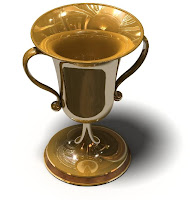 Their contest, their rules, whatever works for everyone is fine by me.
Anyway, after all the awards were given out....everyone won something "scariest" or "most creative"...that way no one was left out.
Tina, who was announcing the winners, and apprently was not completely happy with "excluding the kids",  thought it would be funny to add
"So the overall winner of the best prop goes to the kids, since they were not allowed to participate this year."
I just love that lady.
Sometimes we all need that subtle reminder that we might be taking ourselves a bit too seriously. :D
As decreed by Chris 'Frog Queen' Davis at 1:36 PM