"Prop Hospital" at the Graveyard. 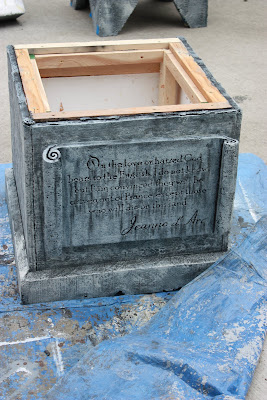 Last weekend was a repair and/or rebuild session at the Graveyard. Every year something(s) break in October that we wait to fix until the following spring and summer. It usually takes us a couple weekends to get the props back in working order.

The major project was separating the Mourner and Joan from their bases. We learned after a few tries that those large tall props are a b*tch to move around in one piece, so we started designing them in two pieces, the base and the statue, much easier to move and set up.

And after that life altering situation with the Mourner prop last year (one of the worst experiences of my life), it was a major priority that these props get adjusted so that never happened again....otherwise I might be done haunting.

We were able to pry Joan off the base without destroying it so her base just needed to be glued to a piece of wood and we were good to go. 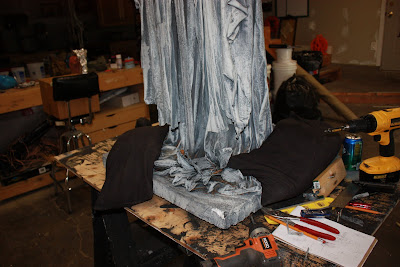 BTW -I did not help with this prop, as soon as we moved her again I could hear her calling me a liar from across the room....remember, she has a sword I was not taking any chances.

The mourner was another story. Let's just say she is my problem child monument. I think it is because she is drinking when we are not looking, but husband says it is because she is top heavy....either way, she likes to face plant. If any prop is going to fall over in the yard. It is her.

She has had more than one operation to attempt to keep her upright. So 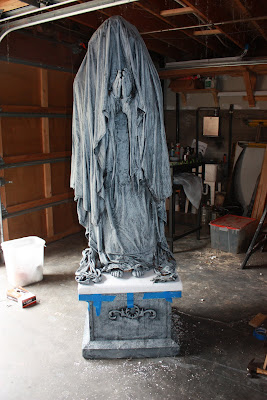 when we took her apart this weekend....it was a bit of a mess, she had some major engineering issues, but after a few redesigns she is done.

She is two inches taller....farther for her to fall when she decides to face plant again :D

Actually no one face plants or falls over anymore. Part of the reason we are redoing the bases is that it is easier to set the prop up in two parts, because we have fitted the body of each statue with PVC pipe that fits over a piece of 5 foot rebar that we drive into the ground and lift the prop over the top of. This is why making the prop in two pieces is easier, you are not lifting the entire prop, base and all into the air and over your head (okay my head because I am short) onto the rebar.

So now all the monuments work the same. Last year at take down we had a little confusion on how the monuments moved and our new demon angel prop took a very nasty spill and suffered a bit of damage.