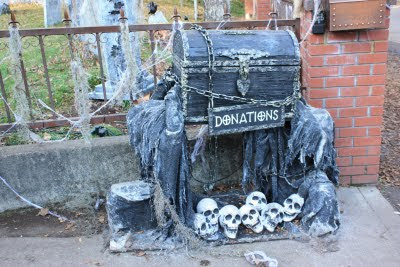 he was nearly destroyed last year on Halloween night. Everyone was standing on him to see the dancers. So he got to spend some time in the "prop hospital" :)

Both of the heads and legs were crushed down to the boards.....and his base had been stood on so many times, that the burlap/monster mud treatment was tattered. Very sad indeed.

So this prop was in need of some major repair work. We rebuilt the heads - this time we put an aluminum frame in for the heads, you will not be able to stand on it (and you should not be) but hopefully it will help hold it's shape better. 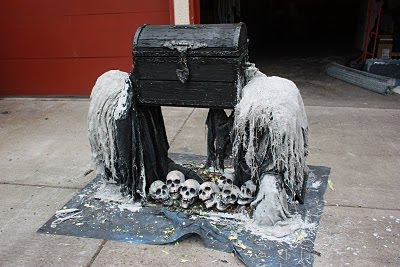 Then we took chicken wire and reshaped the heads and covered them again. After that we remudded the burlap that had been softened by being walked.

We also had to drive in a few more screws to shore the whole piece up....it was a bit wobbly.

The next step was to remove our Great Stuff/spray paint rust effect that we did incorrectly.

It is a technique that we learned from Bad Boys Scenic Design, who learned it from the uber talented Nick Collins...who did it the right way.

We thought we were being clever and removed a step because we thought it was unnecessary.

His version is to have two people - one spraying the foam and another person spraying paint at the same time. That way you work the paint into the spray foam so that it is not bright yellow.

We thought, we will just paint it after the fact....which looks good until you touch it. Then the paint chips right off leaving that lovely bright yellow exposed. Scary in the not good way.

So we scrapped all the Great Stuff/paint off the aluminum trim and did it right this time. It is still going to need a coat of paint to completely cover the yellow....but it looks a lot better.

We learned a valuable lesson....when Nick says to do it that way....listen, he is one of the best in the haunt industry.....why for a moment would we have thought we knew better....silly frog queen.
As decreed by Chris 'Frog Queen' Davis at 7:10 AM