Things I know for sure, part 2

I can pretty safely say that I will never (and I do mean never) own a spider as a pet....I would never sleep again. Ever.

And....my cats would just think it was a toy and spend all day trying to get it - and when they finally did, and they would trust me, they can get into anything.....anything (little furry demons that they are)....anyway, then they would "play with it" (torture it) and even though I don't like spiders....that would just be mean.

I bought a fish once.....I found it dead on the floor when I got home. I felt terrible. I learned my lesson.

The other reason I would not own a spider is that I am not crazy. (Nothing wrong with crazy, I like crazy.) Like my friend here who owns two - not one, but two - tarantulas! Excuse me, while I breath into this paper bag........

He was kind enough to send me pictures.....he was nice about it, he asked first. I was crazy enough to say "sure". What harm can a picture do? Let's take a look.

(silent screaming in my head)

Where is my paper bag?

The first pic is Hairy and the second is Rosie (I believe I have that right...they all look the same to me...scary!) 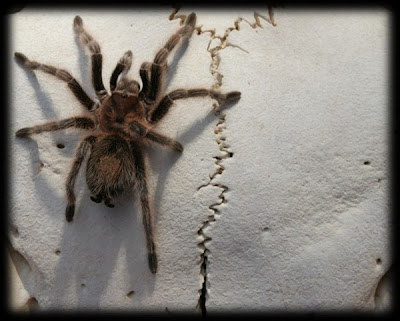 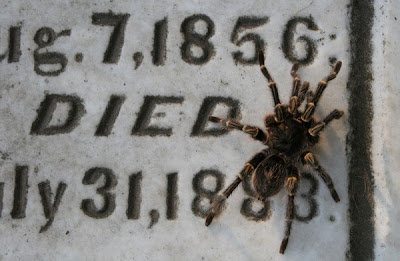 Actually these are great pictures, I like that they are taken with a tombstone and skull for the background. I actually kinda like that.....maybe this spider thing is not so bad.....

...I crack myself up sometimes.