I have this other distraction going.  Our trip back to the UK right after we take down the display.

And for me, it is not possible for me to head over there and not go to my someday home of Edinburgh.  I LOVE this city for many reasons, but one the the top reasons is the ghost tours.  I could go on a ghost tour every day - I am not kidding....every day.

So I thought I would do a repost of some of my old Edinburgh ghost tour adventure posts from our trip in 2007.


If you ever get to Edinburgh....go on all the ghost tours....twice.  Seriously - they are just that much fun.  So we are taking the time machine back to a post in Jaunary 2009.  Enjoy:

I tried to bring a ghost home
from the Edingburgh vaults, in my purse.

I was going to lump all the other Edinburgh ghost tours together...but, this one is too famous and needs its own space. And I just plain write too much.
Today, boys and girls, I will tell the tale of the Mercat Tour tours of the famous Edinburgh Vaults. 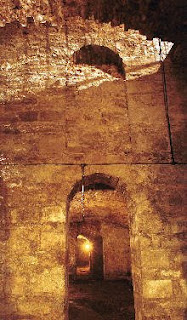 These vaults are creepy and the history just adds to the ambiance. These tours are worth every penny (if you are not claustrophobic :)
History

This 18th century the built South Bridge, a large bridge that spanned over 1,000 feet and had 19 arches for support, was cursed from its first crossing. The story goes that the lady that was promised to be the first person to cross the bridge died days before the opening. Because of the promise the powers that be decided that she would be the first "body" to cross the bridge, and she was, in a coffin.

This caused the locals to swear that the bridge was cursed and they did not use it for many years.

After a while, walking down and around the bridge wore them down and they started crossing. It because a popular place with shops along the top and tenement houses along both sides. They built floors and ceilings in the arches and used the space for workshops and the underground areas for storage.


As years passed the poor construction of the bridge became apparent and with water leaking in and the walls deteriorating. The shops abandoned the space and it then became home to squatters. After several years the bridge spaces became unusable and the everyone was evacuated and the bridge openings were filled with rubble.

In 1988 during and excavation project the remains of this bridge and the vaults underneath it were found. The already thriving Edinburgh ghost tour business now had a new main attraction.


What better place to tell ghost stories than in an dark, candle lit underground labyrinth?

These tours are worth the price just to see the history. But if you want ghost stories, they have plenty! Mr. Boots - named so because of the loud clomping he makes. There is also the ghost of a small boy. The tour guides are great, they tell you stories and warn you not to stand in certain places....which is where I B-line to and then for the rest of the tour, the group, somehow, does not seem to want to stand too close to me.

I was a bit creeped out being down there in candle light with a lot of scared (scary) people. That whole collective energy thing is quite powerful.

The coolest part about these tours is that they give you ghost hunting gear. Ghost hunting gear! Woohoo!!! Count me in!! Oh, knobs, lights and gauges, oh my!. (shake, shake, is this thing on?) I have to admit I had a lot of fun with the handheld ghost detectors (EM devise) they give you.


BTW - I got the biggest reading from the machine when I pointed it at my purse. Looks like I found a ghost that was in neeed of loose change....or breath mints. Eitherway, I thought ....hummmmm, if I don't tell anyone, maybe I can take this ghost home?! Oh, my very own Scotish ghost!!! (Then I think...how do you get a ghost through customs? Is there VAT or duty on ghosts?) Well, you can imagine my disappointment when I got out of the vaults and did not find a ghost in my purse. :(

Important note. It is worth it to go on these tours more than once. (Actually I am just trying to validate to my husband why we have to go on a ghost tour every single night we are in town.) They have many tour guides and they all present the tour differently, that makes for unique experiences. One night you will get the "scary, spooky" guide who talks in a low voice and takes the whole tour VERY seriously. The next night you might get a guide that has a great sense of humor and knows just when to take it dead pan and scare the crap out of you.

Mercat offers other tours....but this one is my favorite.

Ah, I really need to start saving for my next trip :)
As decreed by Chris 'Frog Queen' Davis at 7:20 AM