There are really not 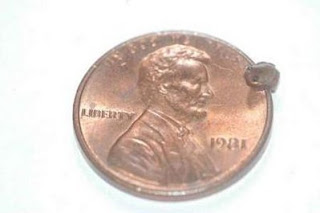 enough frog posts on this blog....for saying I am the Frog Queen you would think that I would post a frog or two now and again.
I have been slacking.  So how about we start small.....very, very small.
Microhyla

A freshly metamorphosed new species of a mini frog, named Microhyla nepenthicola, sits on a penny in this undated handout photo released to Reuters by Dr Indraneil Das of Institute of Biodiversity and Environmental Conservation August 25, 2010. Scientists have discovered a frog the size of a pea, the smallest found in Asia, Africa or Europe, on the Southeast Asian island of Borneo.

This is why there are nor will be real frogs in my home realm. (Thanks to BB for the heads up!)

Back to prop building!
As decreed by Chris 'Frog Queen' Davis at 6:00 AM