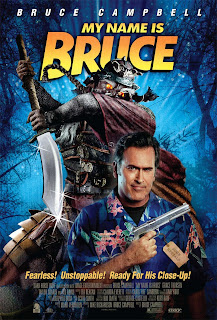 an apology. I knew I had read a very funny review of that dreadful Mega Shark Vs. Giant Octopus movie somewhere. I mistakenly though it was Carl....but it was not. It was Geof. Funny guy, great blog!

He left me a very kind comment on that post, basically he did I say "I told you so" - but he did not call me a dork for getting the wrong blog. What a guy! Thanks.
Anyway...back to that comment. I do have to agree with him that I will put up with almost anything that Bruce Campbell is in. And after watching My name is Bruce, which we loved. We watched the extras the next morning.....
The Heart of Dorkness the "pseudo" documentary/truthumentry was almost better than the movie. Buy the movie just for that. It is a great look behind the scenes and shows how crazy it must be to work with him
We are also interested because he lives in my home state (Oregon) - actually where he lives down in Jacksonville is in the area (Ashland) that we go every year for theater and wine. So it was great to see the local area in a film.
And of course, Dark Horse Comics....is actually headquartered in Milwaukie. So, I had to see this movie on principal alone.
As decreed by Chris 'Frog Queen' Davis at 9:22 PM