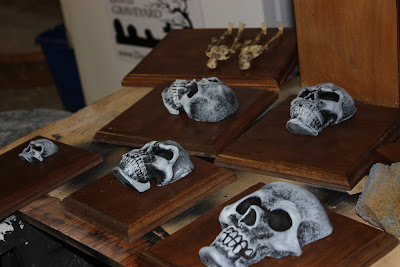 ...no, we still don't know the winner of the Home Haunters Association contest.... :(

Anyway, here are the far more important awards - the awards (at least some of them) for the Davis Graveyard party.
Husband and I forgot to take pictures of them when they were completed and had the plaques on them. :(
You will see at the top there the two skeletons, we melted their arms so their hands are touching....ah, they are for the best couple costume....kinda cute huh?
Then there were the funny awards that we made for the crew. They are items with a plaque attached on them somewhere. No pictures....you will have to use your imagination :)
Messiest Helper - (Plaque will all kinds of graveyard making stuff attached)
Elyssa - loves to make things that make a mess.....which is perfect when working with monster mud in large scale...it gets EVERYWHERE :D
Best Tour Guide (a megaphone)
Tony - my brother, I don't think we could pull on an open house event without him. He is so friendly and helpful at the open house. Every time I turn around he has a captive audience following him around the yard! I don't think he takes a single break in 5 hours!
Best Baby Sitter (pacifiers in a shadow box)
Carol - my mom. Each year we attend a party at our friends the Bishop's (from the Bishop Cemetery). During October we rarely leave the yard unattended, so some one has to watch it, especially on a Saturday night. Each year, my mom volunteers to hold down the fort - and this year she did it all by herself!! Husband and I don't even brave that yard without the other one in tow!
Best Sketch Artist (retro etch-a-sketch)
Toph (Chris) Reid - he is our resident artist. This year it dawned on him that the more detailed sketch he made of a prop, the less likely we are to make it. Reasoning? We usually cannot live up to the detail on his amazing drawings :) He has been kind enough to "dumb them down" (his sketches) for us.
Least Likely to be Found (picture of Nessy, with Jen in a Scottish cap and tartan pin)
Jen - my sister. She has a new house and a (new) fiance (recently engaged) so she has been a bit preoccupied and unable to spend time at the graveyard. Maybe next year :)
Graveyard Photographer (skull with a camera embedded on the side, with the lens being one of the eyes - think Borg skull)
Marci - She has been taking pictures of the graveyard for years. She attends all the events and comes out several times during the season to make sure she gets the perfect shot. She makes us look soooooo good!
Best Assistant (Dirt Devil)
Dawn Reid - if you have something cleaned or you want a person to take charge and get it done without asking you 50 million question...Dawn is your woman....wait, no, she is actually mine (and married to the other Chris) so you can't have her.
Actually, that goes for all the of the crew....stay away, the frog queen is very possessive!!
...oh, and there are a few other awards....but those are another story! :)