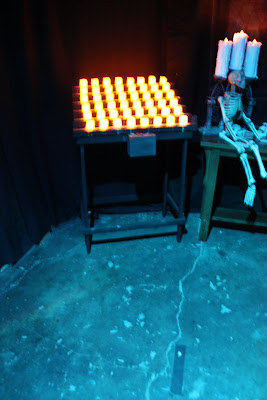 Since we have started decorating the downstairs inside of the shop like a church, you know, to match the facade, I decided to add a luminary to my collection.

The idea came about a few years ago at the Rocky Mountain Gathering in Salt Lake City. I was sitting with husband, and John and Jon from EFX-TEK and we were talking about the flickering candle kit they sold. I said I always liked it...but that having to run all the candles together, is a bit of a pain.....if you have candles all over the place, that means you have lots and lots of wire.

But what if you made a lot of candles in one place....like that thing they have in church?

But I have forgotten....

Anyway, Jon makes a call, and we are enlightened (pun intended) to find that they are called luminaries. 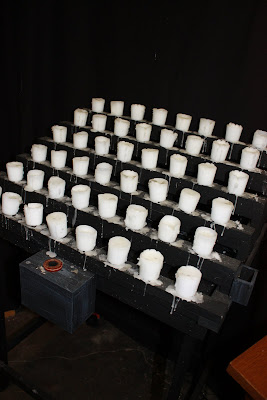 I purchase a ridiculous amount of WickLED lights and a few Prop-1s from EFX-TEK at the gathering....no wonder they were so helpful with this project :)

Back at home, husband builds me the holder and we drill holes to put the WickLED lights through where the candles will go.

Now, yes, I could have just used LED lights, but the WickLEDs from EFX-TEK are three LED lights together that flicker in a way that truly mimics candle light. In a project like this, I think it is an important detail.

Then I run all over town trying to find 48 white votives...cheap (dollar stores in the area only had a beige color.) I then light them all and have them burn part way down at varying depths. Then drill out the bottom of each one with a spade bit so that the base of the candle will fit over the LED lights, up into the candle. I then took a candle and melted wax along the base of each candle.

Husband wired all the lights and four Prop-1 controllers together, wrote bit of code (I believe he stared with the free downloadable code on their site) and put the holder on a small table. It worked perfectly.

Except that the candles I found were "clean linen" scented....now the church smells like fabric softener! :D

This year they came out with a new controller that allowed husband to control all the lights with one board...he was happy, he now had three new Prop-1 cards to play with :)

He added legs to the base as well as a match holder and money collection box at the front.

This year when I mounted the candles I used a small crock pot to melt the wax and pour it on the candles and the holder....much faster than melting with a candle. 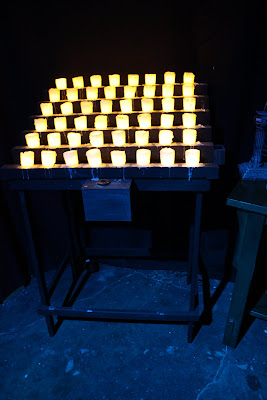 It is just about perfect. (picture is just a little fuzzy :)

Now, if I could just find plastic votive holders! :D - something about fire and plastic.....I see where there would be a problem :D

The ones you see in most churches usually have the candles in (predominately) red glass holders. Since I have not been able to find a way to drill through glass without breaking it, I cannot use then. Any clear plastic cups....look like small clear plastic cups and not candle holders. I have tried using sheet plastic to make a cup, but the plastic is too thin and does not look like a votive holder.

Hope you enjoyed my latest folly...I have several more to share and many more to make!