Husband and I are finally getting our act together and working on our video for the Haunters Video DVDs.

I know, you are shocked, how can ours not be done? I hear all of you saying "Weren't they due the end of December? And don't you guys host the awards or something like that? Being late is setting a bad example for the rest of us!"

Yes, yes they were due. And in this case, do as Paul says and not as we do. We are a bad example fellow haunters - get your videos ready early. Davis Graveyard, very BAD, all you other haunters that got your video in on time....you are very GOOD!
(So if you have not got your video or pictures in for the DVDs, good news you still have until the end of January....really, that is the final, final deadline!!!)
Anyway, we know Paul "Propmaster" (fantastic guy by the way) and that the deadline would be extended. So husband and I put off the torturous task of putting together our video. We made it through a good hour of footage before we started to get just a little nippy at each other....okay, honestly, I was the one getting nippy - don't all you of you look so surprised! :D
Even with hours of footage......we have absolutely no footage of the ghost coming out the door and down the stairs. Probably the most complicated and coolest effect in the yard!! Nothing...only stills....great stills by the way, but that is all. 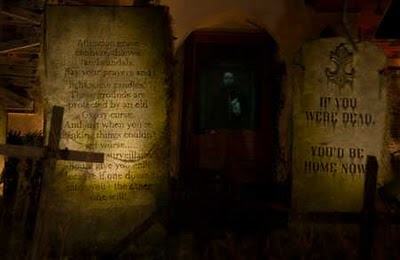 I am about ready to set it all up again and film it. (Not going to happen, husband would kill me!) :D

So husband is working on the video ...hopefully I can see the first version tonight.....and after that....I hope we are indeed, still married. :D
As decreed by Chris 'Frog Queen' Davis at 2:30 PM