after you you say "I do"....I found that both Husband and I are fascinated by old amusement parks. There is a very old park (or what is left of it) called Oaks Park just down the road from our house. I remember a very long time ago that we went down there, before they restored part of it and took some pictures (this is not that post...those pictures are in the basement..I need to find them) then we went to the library and the historic society (yes, we are talking the mid 80s - Internet not what it is today) and researched that park and another one that is now completely gone.

Here is the "House of Terror" at the Takakanonuma Greenland Park in Hobara Town, Japan. From the blog Arificalowl.net it appears that it was only open two short times (less than five years since it was build in the early 70s.) 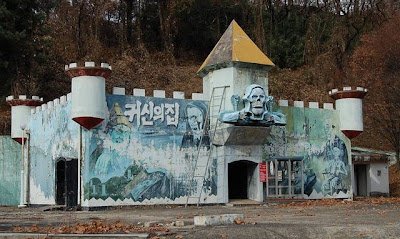 There are many resources for abandoned amusement parks, but one of the best I have found (and where these photos came from) is Dark Roasted Blend. Do yourself a favor and check out the link (these pictures come from his blog) to see some very cool pictures of abandoned parks in Asia.....I don't know about you, but there is definitely some disturbing about an abandoned amusement park. 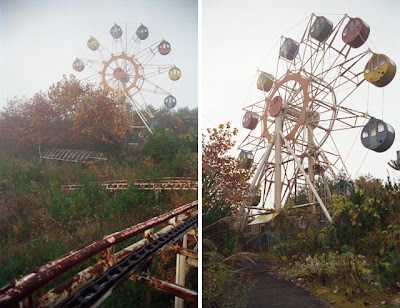 Reminds me of Spirited Away (one of my favorite movies) It is funny now, when I remember back to that movie I did think it was odd that there was an abandoned amusement part in the middle of nowhere. Guess it is not that odd at all :)
As decreed by Chris 'Frog Queen' Davis at 7:20 AM