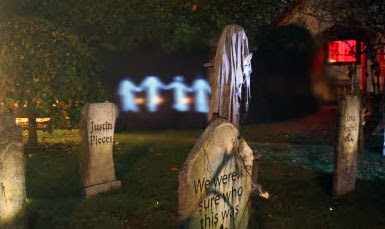 Well, I think somewhere along the line we decided that keeping four video effects up and running was just too easy, let's try another one :D
This is our latest ghost effect. It is four kids running through the very back of the graveyard.
We got more comments on this than anything else we did this year.
Here is how it works:
We took 30 feet (three 10 foot widths sewn together) of black photograph background cloth and put a seam at the top of it so that we could run it through a cable line that extends from the back door of the house to the far right corner of the shop.
To hide the background during the day, we pulled it along the cable towards the back door and tied it up - we just untied it and pulled across the year each night we ran the effects.
To keep the fabric from blowing in the wind, our fabulous friends came up with the brilliant idea of making long narrow tube sandbags to place all along the bottom. These worked perfectly (except for really windy nights) to keep the fabric/screen taunt as a projection screen.
To create the effect:
During the day, we then filled four of our friends kids, three of them are the children of some of the ghosts in the yard :) all dressed in white against that black background. We had them throw a ball around, do ring-around-the-rosy, and then we put them in white sheets to make what we call "Charlie Brown" ghosts.
Then husband did his usual "ghosts magic" in Pinnacle to create the eerie ghost effect video and copied it to a compact flash card.
Then we took a projector and one of the new handy-dandy solid state video players (so much better than the DVD players) that automatically loops and hid them behind the large, wide "Goodbye" tombstone. We then projected the image on to the fabric.
It was not obvious and only visible from a few angels in between tombstones (this picture is from inside the yard, a less obstructed view.) We think enhanced the creepy effect, since it was not something you noticed right away (or maybe not at all - not our fault that you just drove by and did not bother to get out of the car. :D )
One of my favorite things this last season was sitting out in front of the yard and hearing the kids very proudly tell people or their friends "that's me, I am one of the ghosts." I think every kid within earshot was immediately jealous :D

Yep, you cannot buy that kind of happiness! :D