"So which one is your favorite 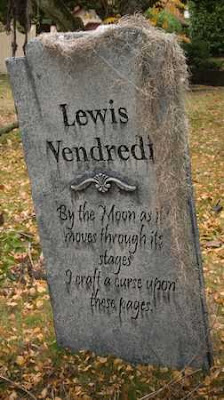 tombstone?" I get asked this a lot during the season by visitors to the graveyard.

I used to be honest about it.....but when I told people which one, they all went "Huh, what, I didn't get that one?"
Even when I explained it they all looked at me like "Huh? okay, whatever." (likely muttering "crazy lady" as they walked away.) :D
So, for visitors, my favorite tombstone varies from day to day. I think by the end of the season I had them all covered :D
So in honor of Friday the 13th, here is a picture of my favorite tombstone.
It is a reference to Friday the 13th the series. What? I hear you say? Yeah, I think I was one of only 100 people that actually watched the show :D
Lewis Vendredi was the owner of the shop that sold the cursed objects and died when he tried to break his pact with the devil.

"By the moon as it passes through it's stages, I put a curse upon these pages."

The saying is something I found...I had a hard time coming up with something for that tombstone, but since the story relied heavily on the "manifest" a book that listed all the items and who they were sold to. Although the quote is not accurate to the story (the book was not in fact cursed, the objects listed in the book were), the fact that almost no one gets the tombstone anyway, it is close enough for me.

Not a single person that has visited the yard has mentioned this tombstone. I even had a contest a couple years ago we held a contest for guessing the references on the tombstones, no winner.

Out of hundreds of entries, no one got this one.

At this rate......I think I have to add this tombstone to the frog queen folly list. :D
As decreed by Chris 'Frog Queen' Davis at 8:59 AM