As the EMTs and the ambulance driver 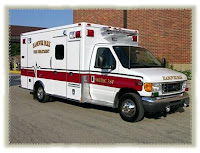 come up the driveway during the tombstone class.

Everyone sitting down? Good. Here we go.

I live on a very busy street. It is residential, but it is an artillery between two major highways, so people like to cut through the neighborhood, going much faster than the posted speed limit. So, several times a year someone is not paying attention and we are treated to what we affectionately call, metal sculptures.

So, on Saturday in the middle of the very busy tombstone class, we hear a familiar crashing sound. Now, husband and I are not too worried, heard it before, the sound quickly runs through our heads and we register that, no, that one did not sound fatal....but I pop my head out up to see the street and notice that there are several cars involved.

And I think sh*t, normally when this happens everyone pulls their cars out of the road and in front of mine and my neighbors house............which on this fine day is full of the cars of the students for the tombstone class. Double sh*t! :)

I ask one of the helpers that does not have paint all over his hands to call the police because the cars are not moving out of the road and people are honking....it is getting ugly fast.

Let me divert a bit here and let you know something that is constantly going on in the back of the Frog Queens mind. Because I live on a busy street, I know that it will only take a looky-loo or two gawking at my yard that causes and accident - that will likely get me shut down.....or in this case, and event in the house that leaves accident victims no place to park. (This is why we are so nice to the Milwaukie Police department :)

Well, with us doing our good neighbor part, we go back to tombstone making. In the blur of 15 people asking questions and working away I glance up to see a police car in front of the house...no worries, glad they are here.....then later and ambulance....I hope everyone is okay....but back to working.

Then I look up and see men in blue uniforms coming up the driveway with my friend Dawn. Great, I think of ways to convince the officers that
the hearse parked out in front of my house could not possibly have been the distraction that caused the accident......
or how all the people walking around with tombstones could have in no way distracted the drivers :)

I expect them to walk up to talk to Jeff and I, but she walks right past us and over to where everyone is painting.
Appears that they saw people walking around with tombstones and wanted to know what was going on. They are laughing and commenting on how fun this must be, and one of the guys knows the yard well and was telling the other what it looked like set up. Everyone was sharing their tombstones with them and thought it was great fun.

My favorite was when one of the EMTs thought he would love to make a tombstone....and he knew exactly what to put on it.....the name of his ex-wife :D

The only thing I regret about the day is that I was going to get our camera to get a picture of these officers standing in the middle of the tombstone class, but I got distracted by someone asking me a question, and before I knew it....they were heading down the driveway :(
I hear that people that were in the accident were talking pictures of the class while waiting to fill out the police reports.
Never a dull moment at the Graveyard. Yes, we know how to keep it interesting. :)

Looking forward to doing this next year - sans the metal sculpture!!
As decreed by Chris 'Frog Queen' Davis at 1:01 PM