Now for something completely different

:D I have always wanted to type that as a blog heading :) This should really be a Frog Queen folly.....but no, not tonight.....it has been a long day. So humor me.

This is not at all Halloween related....unless you consider Labyrinth a horror movie - no, not even I can make that stretch. A little dark at times....maybe.

Someone posted an image of David Bowie on the LOLcleb site. 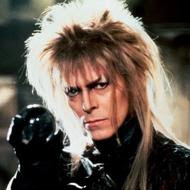 Being a huge fan of the film Labyrinth (and Bowie, especially in tights) I had to read some of the comments. Here is a thread of a few of the comments that made me choke on my iced green tea.

After a whole run through to the lyrics of Magic Dance line by line....groan, I was and singing in my head too :D

It started with someone saying
......Oh look, there is god! :) followed by

......If all major christian religions would concede that this is god, I'll become a nun.
(In my head I quickly agreed :)

Took me back to Catholic school days....yeah, none of us girls would have ever, ever, ever missed morning service if that were the case (I know my sister and I would not have :).....nope, in fact we would have shown up early!!

Okay, back to prop making I am currnetly downloading Magic Dance to my iPod. Just for the record. It is the song that the Angel of Death will be built to - a bit of inside info.
As decreed by Chris 'Frog Queen' Davis at 12:15 AM