I try not to make it easy 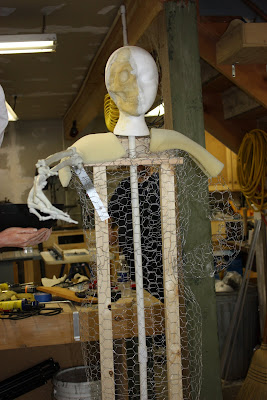 for myself or anyone involved when making a prop.

Challenges bring out the best in you?!? Right!?!

Okay, in my case, this might just be the proof that the Frog Queen has indeed gone over the edge.

I could have replaced my old angel with another angel. A simple, sweet angel, something right out of a forgotten graveyard, forlorn and sad.

But, no, why do that when you can make it twice as hard and create a angel/demon statue instead.

Yep, the new angel will be half skeleton with flaming sword (angel of death) and half quite, simple angel.

But in no way a simple prop.

Here she is with her half wig head, half foam skull face and her chicken wire body.

She has "shoulder pads" because if this does not work....she is playing American football. :D 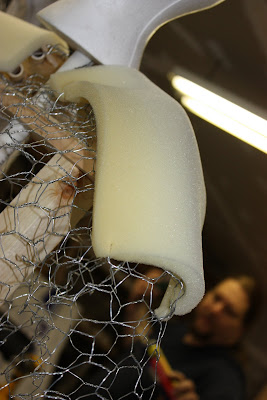 No the pads are because we are using sheets to create her gown and if you do not put something over the shoulders and other parts of the body where the fabric lies, you will see the shape of the wire.

Actually, this one would be more of a cheer leader, it is hard to see on this picture, but my angel has some serious curves going on. Yes she does! After transforming the last angel into Joan (yes, I know I owe you pictures of that one....they are coming I promise.) I realized that she really had no figure.

My friend Elyssa who helped me with this one imagined the Angel of Death would have an awesome rack and some serious pa-dunk-a-dunk! Sorta the Anime Angel of Death - I mean what is not to like about that :) 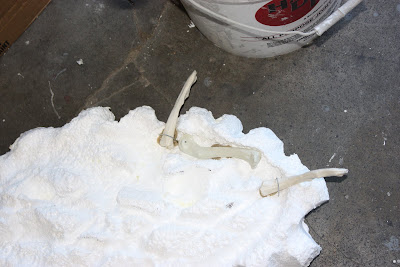 On the skeleton side she will be holding a flaming sword, and one skeleton foot will be showing from under the fabric. Very cool!

Then we are on to the wings. My new friend Mike came over and carved out a nice wing and a manky wing. Below is the manky wing. I added a few bone pieces to it and poured some expanding foam over them to seal them in. We are going to sand it out so it looks like bits of bone are sticking out of her wings!! 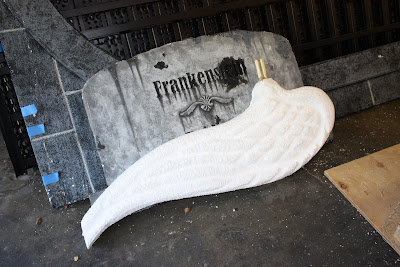 We will sand out this nice wing and make it look smooth and clean for the good angel side. We have PVC in the wings so that we can take them off when we are storing her.

She is on our project list this weekend. If the weather cooperates, we should have pictures by Monday.
As decreed by Chris 'Frog Queen' Davis at 9:00 PM