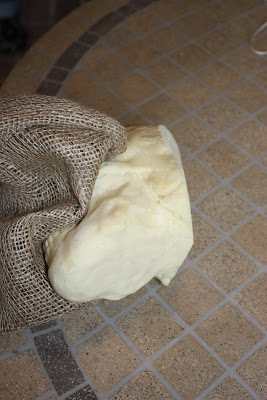 As Grim mentioned this is inspired by the Grimvisions burlap scarecrow head.

Not sure how he did his, but I just used a 3/4 foam Bucky head (I had to cut off the back because due to a pouring mishap...the skull originally looked like the head of an Alien - cool, but not what I wanted to for this prop.) I then took a piece of burlap and some 90 second epoxy (I have to use something that can hold up to the rain) and pushed the fabric into the crevices with a popsicle stick. and held them there until they dried. I then drilled a 1/2 hole in the bottom of the head to attach it to the base.

I made the body out of a 1x3 in the shape of a "T" and covered it with a bit of bubble wrap, I wanted him to be thin, so I did not use much padding. The I attached a 1/2 piece of PVC for the head to attach to. Got a shirt and overalls from the thrift store and dressed him.

Then for the feet and hands I used those cheap decorated brooms from the dollar store (removed the cute) and cut them way down. Not only does this offer straw for the arms, b 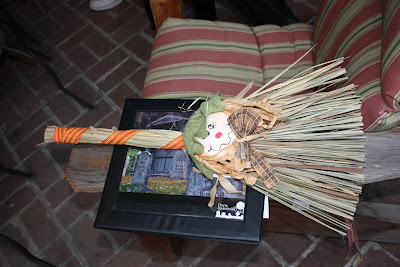 ut the shape of the broom shoved up the sleeve helps give his arms weight.

Not pictured - We then air brushed the crevices in the skull with airbrush paint and then took some twine and sewed in the mouth form. I have stuffed the body with straw and tattered the burlap around the neck.
He is in the garden with my skeleton in the pumpkin patch. I have him attached to the frame with screws and zip ties.

I will go out over the next few nights (at dusk) and age him with some watered down black and brown paint in spray bottles. I have a small skull, 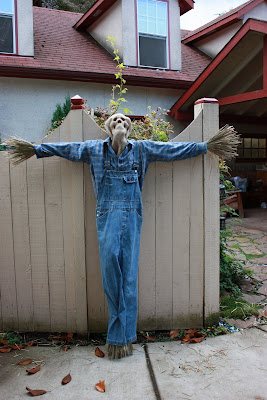 the same as the necklace that the skeletal angel is wearing to pin on his overalls....a bit of tie in to the back-story.

When he is done this weekend, I will take more pictures.