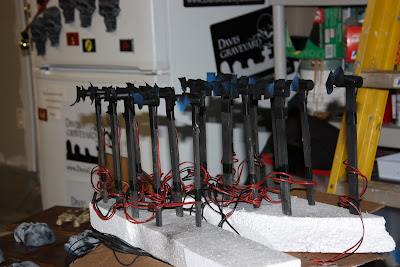 These are the red glowing eyes for the vinca on the slope at the front of the house. A few years ago I made crosses as sort of a Potter's Field for that area and last year we decided to put LED eyes in the bushes...to make it look like there were little scary things hiding in there.

That was the plan. And like so many good plans, that is not what happened. It started with the LED - brighter is better right?

Well, not in this case. We took two red LEDs and made these wooden frames for the LEDs to connect to look like eyes, and then attached them to stakes so that they could be put in the ground. A bit of black spray paint and they should be virtually invisible.

That part worked like a dream. But when we turned it on, in the dark, the bright LEDs looked like lasers pointing out of the bushes. We had to explain to people what it was, some even thought it was part of an elaborate security system :D Not what I was going for.

So after several experiments it was decided that hot glue would work best. My favorite minions Dan and Elyssa cut hot glue sticks into small sections, cut a small area out of one end for the LED to fit into and then heated the other end until they got soft and then pressed them on to some Teflon paper to give them a flat "eye" like surface.

Then they were hot glued on to the LEDs and and we staked them into a piece of scrap foam (pictured) put blue tape over the flattened "eye" area and spray painted the heck out of the sides of the glue stick.

Now they have a more soft and subdued look..oh, and husband adjusted the brightness on the program for the Prop-1 so that they also do not come up as bright.

Should look much better.

Next project, we are making the bushes the lights are in rattle every so often to look like there are, in fact, little creatures with red eyes in the bushes :D

Just another day at the Graveyard :)
As decreed by Chris 'Frog Queen' Davis at 8:10 AM