See, I told you I am recruiting

Introducing Gabe - one of my new fabulous ghosts....and dry-brush-corpse-painter extraordinaire!

Seriously, here is how it we discovered this.

Gabe asked if he could help.

"Sure, I say, how about dry brushing some corpses?"

Now, I am sure he had no idea what I was asking but he says "sure" faster than I can even start explaining.

One of the fellow minions asks as I walk a corpse over to the tarp....

"Does he even know what dry brushing is?"

"He is going to learn now" I reply.

I do a very quick spiel about how you dip the brush, wipe off the excess and brush the skeleton. I seriously just did one swipe, handed him the brush and he

painted them like he had done it his whole life, granted, he is not that old, but still impressive :D.

Wow, it took me a moment to call his parents over to see what was happening because I had to pick my jaw up off the ground.

"Seriously you guys, you have to come see this!"

We were all so wrapped up in the moment, I almost forgot to take a picture....almost :)
\ 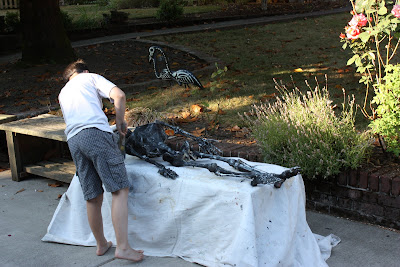 Thanks to you Gabe I have five newly painted corpses ready for their respective nooses or cages....you are now officially a Davis Graveyard Minion.

Join me in wishing him a warm welcome :)
As decreed by Chris 'Frog Queen' Davis at 12:35 PM